The cities of Dover and Portsmouth have been working together to establish an emergency water interconnection and had funded preliminary design work with joint consultant Underwood Engineers. The municipalities also jointly applied to the Commission for the DWGTF grant to cover costs for complete engineered design plans. The Commission’s approval was critical to advancing the time-sensitive project, given that the New Hampshire Department of Transportation (NHDOT) is now in the process of preparing design and bid documents for the construction of the new bridge.

The New Hampshire Department of Environmental Services (NHDES) and its Drinking Water and Groundwater Trust Fund Administrator voiced support for the project. The DES noted the emergency interconnection would provide an additional critical link for providing an emergency water supply to the Seacoast region and would benefit numerous communities, including Rochester, Somersworth, Rye, Hampton, North Hampton, and Seabrook. NHDES agreed with Portsmouth and Dover that it is critical for the interconnection to be incorporated into the overall bridge design before it is finalized and the project is ready for bidding.

NHDOT has agreed to allow Dover and Portsmouth to utilize the General Sullivan bridge to carry the emergency interconnection water main. NHDOT, through its design consultant, is providing design phase services to support the pipe crossing, including structural design, support, and bracing for the waterline. However, NHDOT has indicated it cannot fund the complete engineered design. NHDOT estimates construction of the new bridge would start in fall 2023 or winter 2024. With the design work being addressed, the cities will continue to explore potential funding utilizing state water supply grants and/or federal infrastructure funds for the actual construction work.

The Drinking Water and Groundwater Trust Fund Advisory Commission is a 19-member public body created by the NH Legislature that includes representatives of five state agencies, members of the NH House of Representatives and NH Senate, municipal officials and members of the public. 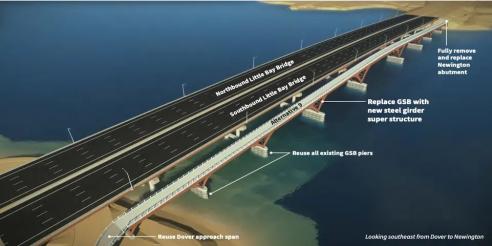