At a City Council presentation on November 15, 2021, (timestamp 43:56) NHDOT officials confirmed that the Pannaway Manor and Rockingham Avenue neighborhoods met the criteria for the construction of a sound barrier between homes there and nearby Interstate 95. However, a proposed sound barrier for the New Franklin School neighborhood — which is located close to I-95, Route 1 and the Spaulding Turnpike — did not meet the NHDOT criteria.

Assistant DOT Commissioner Bill Cass told the City Council the projects qualified for state monies because of the upcoming project that will allow the use of I-95 shoulders from about the Portsmouth traffic circle to the Maine/New Hampshire border during peak volume periods, primarily summer weekends, starting in 2023. Because that project is adding capacity to the highway, the sound barrier projects qualify for funding.

Residents in the Pannaway Manor neighborhood requested sound barriers along the Interstate 95 corridor to reduce noise coming from I-95. In July 2019, NH DOT declared Portsmouth eligible for $2.3 million in state funding for the construction of the sound barriers. At the time, Portsmouth was the first community in the Granite State to be approved for New Hampshire Department of Transportation's Type II Noise Abatement Program.

Noise abatement for the I-95 corridor was listed in the city's CIP in 2018. In April of that year, Department of Transportation Assistant Commissioner Bill Cass visited and inspected the site where the sound barriers would be installed, and the following January, the City Council adopted the Noise Highway Overlay District. Council members also adopted zoning ordinances addressing development in areas that are close to the highway, which were required for the state funding application. In fall 2019, NHDOT conducted a pilot assessment of the project to identify all Type II-eligible abatement measures within the City of Portsmouth.

City funding for additional sound barriers is being considered for the CIP for FY24-29. 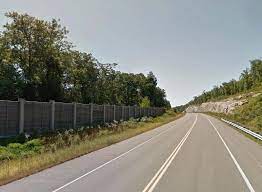