The PHS Debate Team persisted, even during the pandemic, with online tournaments, to post an undefeated record after competing in New York, Massachusetts, Texas and New Hampshire.

Members of the team will go on to compete at the Nationals in Louisville, KY and in the Coolidge Cup which is a national tournament held in Plymouth, VT.

Coach Joseph Kraus, the Portsmouth High School English and Debate Teacher has guided the Debate Team to the Nationals for three consecutive years.

Seven members of the team are graduating Seniors and headed to college in the fall:

The Portsmouth High School Trivia Team, for the past four years, has played weekly Trivia Tuesday games under the guidance of advisor Hannah Dul.To practice, they’ve been using Granite State Challenge, Quizbowl and general trivia questions on topics including math, science, literature and pop culture. Their goal was to win a championship for Portsmouth and this year they have triumphed by winning the 40th Anniversary Granite State Challenge Championship. The last time PHS won this title was 30 years ago.

The team also won the Maine Quizbowl which earned them a place in the Quizbowl Nationals in Atlanta, Georgia. 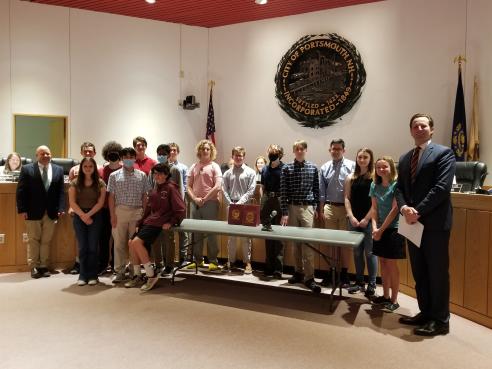