John P. Bohenko was the City Manager of Portsmouth, New Hampshire for 22 years. He retired in December 2019 after 40 years in municipal government and public service.

John earned his Bachelor's of Science degree in Public Administration from Bentley University and a Master's Degree in Business Administration from Rensselaer Polytechnic Institute. He continues his education through programming within the International City/County Management Association (ICMA).

Along with the City of Portsmouth, he has served as Chief Executive Officer and Chief Administrative Officer of two other New England municipalities including Plainville, CT and North Andover, MA where he was able to successfully keep the tax rate low while also providing quality services.

John has led an accomplished tenure in Portsmouth, where his fiscal policies and management of funds led to successive increases in the City's bond rating and ultimately to a AAA rating from the Standard & Poor's rating agency.  He has also overseen the development of the City as it has become a tourist destination, historical hotspot and cultural hub both statewide and nationwide.  In addition, John serves on the Board of Directors for the Pease Development Authority and many other professional associations.

Most recently, John has endeavored to give back to his profession, through his service on the ICMA Board of Directors as Vice President of the Northeast Region.  As Vice President, John has played a leading role in the Life Well Run campaign, a program that encourages public awareness of the pivotal role municipal managers play in building successful communities.

John is married and has two children.  He has been a member of the Rotary Club for thirty years, and is a Past President.

State of the City Address 2017 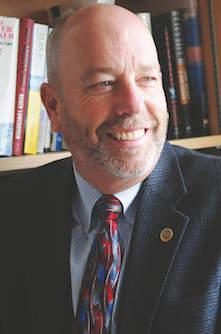