The first, at 10 a.m. is the rededication of the Woodbury Avenue bridge over the Rte. 1 Bypass as the George R. Laderbush Memorial Bridge. Born in Greenland, then a Portsmouth resident, George Robert Laderbush, Torpedoman’s Mate, 2nd Class (USN) was lost with 69 other members of the crew aboard the USS Flier (SS-250) which sank on August 12th 1944, after striking a Japanese mine. The bridge was originally dedicated to him when it was built in 1949 and the original bronze plaque, now refurbished, will be unveiled at the event. Mayor Jack Blalock will read a Proclamation of the re-dedication of the bridge, recognizing the supreme sacrifice of Torperdoman Laderbush, his crewmates and all of the sailors who have called Portsmouth their homeport.

The USS Flier was one of 52 United Sates Navy submarines lost in the Pacific Theater during  World War II, and George Robert Laderbush was one of a total of 374 officers and 3,131 crew lost on those submarines.

Following the ceremony, the Woodbury Avenue bridge will reopen to traffic. The completion of the bridge marks the conclusion of the project by E. D. Swett, Inc. to replace all of the bridges in the Route 1 By-Pass Bridge Project, also including bridges on Maplewood Avenue, Albacore Park, Stark Street, Islington Street and Middle Road.

At 11 a.m. officials including Mayor Blalock reconvene at the Soldiers and Sailors Monument in Goodwin Park to conduct the annual Veterans Day Commemoration  organized by the Central Veterans Council. The keynote speaker for the program is Captain Daniel Ettlich, commander of Portsmouth Naval Shipyard. The Portsmouth High School Clipper Band will play taps and the national anthem and The Seacoast Marine Detachment will fire a volley “at the eleventh hour on the 11th day of the 11th month to honor our veterans.” 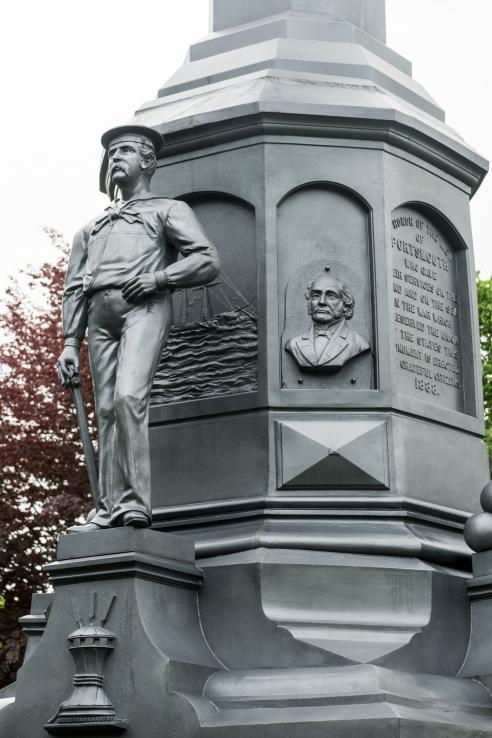