The Special Collections room at Portsmouth Public Library includes information and resources pertaining to local history and genealogy topics for Portsmouth, the Seacoast, and some surrounding cities and towns.

While the collection development efforts have focused on acquiring materials relating primarily to the city of Portsmouth, information about other towns in Rockingham County, including town histories for Strafford County, NH, York County in Maine, and a bit of Essex County in Massachusetts, are also available.

Check out recordings of our past Local History Talks and Genealogy Workshops!

Hours: The Special Collections Room is open to the public during the regular hours of the library. No appointment necessary.

Collection Highlights and Items of Note

Portsmouth is filled to the brim with history! Settled in 1623, our city has nearly 400 years’ worth of stories that can be told through the artifacts, houses, and sites we’ve chosen to preserve. Take our walking tour through the South End and as you stroll, we’ll point out some of these spots and share our favorite tidbits from Portsmouth’s past along the way! Download our PDF or pick up a copy of the map at the library. Stay tuned for a video!

If you are searching for a particular plot, visit the Special Collections Room to check the name indexes and plot maps before you walk the cemeteries. Indexes are available for North Cemetery, Point of Graves, South Cemetery (which includes 5 smaller cemeteries: Cotton, Elmwood, Harmony Grove, Proprietors, and Sagamore), Temple Israel Cemetery, Union, and miscellaneous family gravesites. Many thanks to the volunteers who made this possible.

Before you walk a Portsmouth Cemetery in search of an individual plot, we recommend you visit or contact the Special Collections Room to check our cemetery indexes for names, plot numbers and maps.

You can also search FIND A GRAVE , or view and download the library's collection of maps and PDFs, either on our cemetery index page, or our digital collections archive. 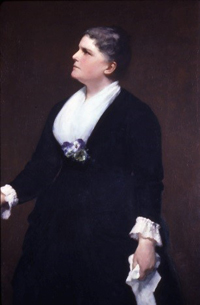 Much of the library’s art and artifact collection is on view throughout the building, including a grand Portrait of Celia Thaxter by Otto Grundman which is located in the lobby.  Some works require low light and must be kept in storage.  The library is making an effort to digitize these collections to make them accessible.  Some of the highlights of the collection include: a collection of watercolors by Sarah Haven Foster (1827-1900), a collection of drawings by Helen Pearson (1871-1949), several works by Susan Ricker Knox (1875?-1959) and several paintings by Russell Cheney (1881-1945). Please contact the library or visit the Special Collections Room for more information. 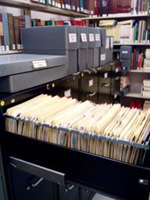 Librarians have maintained a gathering of newspaper and magazine articles, pamphlets, brochures, photographs, postcards, and other ephemera relating to people, places, and things in Portsmouth and the surrounding communities. It is intended to provide patrons with historic and background information on each topic. It is a great place to start! Please note: these files are not all-inclusive for any given topic. It is likely that additional material for each topic is available within other Portsmouth Public Library holdings as well as other collections in the Portsmouth area.  There is a finding aid available in the library. The files are stored in the Special Collection Vault and require a librarian to retrieve materials.  Please ask a librarian for assistance.

Upon request the library staff can perform a name search to assist in locating local obituaries which may be printed from microfilm held in the Reference Department.

Thanks to long-time volunteer Cynthia Thomas, the library has a fairly comprehensive index of death notices and obituaries appearing in the local newspapers from 1891-2000.  Staff and many volunteers have created a database, and continue to gather and enter obituaries through current dates.

This collection of 20 files was compiled by the Portsmouth War Records Committee during the World War II years. It includes photographs, scrapbooks, newspaper clippings, posters, pamphlets, and reports from businesses, clubs, and organizations.

Library Staff and volunteers have redesigned our previous digital archive for easier use and better access to the fragile and historic items found in the Special Collections Room. While protecting the integrity of the original items, the library wants to share the items we care for with the community. Our hope, as we continue to identify interesting items and digitize them, is to also create a dialogue with the Portsmouth community about our shared local history. Please use the commenting feature to share memories and facts about each item. To learn more about future digitization plans, or ask questions about the items included, please visit the Special Collections Room, submit a question using the contact form for Katie, or call (603) 766-1723.

This collection of images comes from Portsmouth’s North End, circa 1967. It is the area bordered by Market, High, Congress, Bridge, Maplewood, and Russell Street. This area was re-developed during the 1960s as part of a Federally funded Urban Renewal movement that followed World War II. Primarily an Italian neighborhood, approximately 176 inhabited homes and active businesses were documented prior to removal.

In addition, for images of residents and families from this area of the City, check out the North End Neighborhood Collection at the Portsmouth Athenaeum, created in collaboration with members from the Seacoast Chapter of the Sons of Italy.

This project, created and scanned by a group of volunteers, gathers images of the students who attended the Haven School in the South End. The database of photographs is available for browsing and commenting. Images will be added periodically as residents share photographs with the library!

Sarah Haven Foster (1827-1900) was the daughter of John Welsh Foster (1789-1852) and Mary (Appleton) Foster. She lived and painted in Portsmouth, the surrounding area, and abroad. A collection of nearly 1000 watercolors was gifted to the Library by her sister Mary A. Foster in 1901.

This collection has received conservation and preservation care through grants from the Rosamond Thaxter Foundation and the New Hampshire Conservation License Plate Program.

This collection of 400+ postcards, depicting buildings and scenes of Portsmouth and the Seacoast area, was donated to the Portsmouth Public Library by the family of Louis J. Mackles in May of 2015.

This collection is an assemblage of work by Gundalow Captain Edward H. Adams. Born Edward Hamlin Adams to Joseph and Olive Adams on October 22, 1860, Adams was influenced by his artist mother and began carving as a child. He started modelling his first scale Gundalow in 1882. Adams spent decades hauling freight and navigating the Piscataqua earning himself the title of Captain. This digital collection consists of photographs of about 175 of his original models and carvings. They were previously housed at the Sheafe Warehouse, and are now cared for by the Special Collections staff at Portsmouth Public Library, on behalf of the City of Portsmouth Trustees of the Trust.

This collection consists of 336+ historic bookplates and corresponding material from local artist and musician Helen Pearson. These bookplates were accumulated from her travels, acquaintances, other collectors, and membership in several national and international bookplate societies. The collection was initially created and organized by Pearson. It arrived at Portsmouth Public Library as a bequest upon her passing on August 19, 1949. The collection was added to and at least partially mounted by then Library Director Dorothy Vaughan.

This collection consists of a series of drawings created from 1908 to 1913 by local artist and Portsmouth native Helen Pearson. In 1993, Ray Brighton called Helen Pearson "one of the best artists Portsmouth ever produced whose talent has been largely forgotten.” Born in Portsmouth on Nov. 13, 1870, Pearson was trained as a concert pianist and attended Boston’s Cowles Art School. She played piano with the Schenectady Symphony Orchestra in New York, but was most recognized throughout the Seacoast for her pen and ink drawings in local publications. Her “Open Door” drawing, in particular, was used for many years in Portsmouth publicity pamphlets. This collection includes 14 original Helen Pearson drawings, 12 of which were created for her 1913 volume Vignettes of Portsmouth, New Hampshire, in collaboration with Harold Hotchkiss Bennett.

This collection of 19 original Christmas cards, was created by local artist and long-time Portsmouth resident Dorothy Sturgis Harding (1891-1978). These cards are part of a larger amalgamation of Harding memorabilia and have been gifted to the library by Portsmouth resident Joan Christy. The Dorothy Sturgis Harding Christmas Cards are drawn in pen and ink on cardstock and were used for holiday greetings in years spanning 1947 through 1976. According to local residents, Harding's Christmas cards were highly prized and eagerly anticipated each year. They are immensely detailed and unique to this artist; and many depict Portsmouth area views; including the historic Martine Cottage, which was one of the Sturgis family homes.

Historic materials from the 350th anniversary of the City of Portsmouth, celebrated in 1973.

The Portsmouth Public Library is an Affiliate Library of the Family History Center of the Church of Jesus Christ of Latter-Day Saints. This Affiliate status allows our patrons access to thousands of restricted records. Unfamiliar with FamilySearch’s online database? Use this guide to get started.

Newspaper Resources at the Library

Newspapers are an invaluable research tool for genealogists. This guide will help you navigate all of the newspaper resources available to you through the library, including microfilm and digital papers.