The venerable gilded mahogany eagle carved by Strawbery Banke Museum’s Ron Raiselis and restored by Jared Tuveson of Tuveson Studios in Rollinsford NH returned to the top of the Liberty Pole in Prescott Park this morning. This 38" tall, 36" wide eagle, the third since 1824, has watched over Portsmouth since 2002, turning on its perch with the wind thanks to the metal rod on which it can pivot. It was removed for restoration last September when the Liberty Pole was being repainted.

Today, after more than 75 hours of painstaking work to repair the cracks and abrasion caused by wind-driven rain, snow, ice and other birds, and to re-gild the 28 square foot surface, the eagle has landed. The crew consisting of Andy Tilbury from Portsmouth DPW and Tony Herbert from ProCon Construction hoisted the bird back in place. DPW secured the donated loan of a lift from United Rentals, through ProCon, to reach the top of the 110-foot Liberty Pole.

According to Jared Turveson, “The greatest danger to the lifespan of the finishing, and indeed the bird itself, is that of abrasion.  From all my work on the bird it is obvious that the greatest source of such loss comes from the birds which like to borrow the lofty perch regularly, and oversee their domain.”

"We are delighted to return the eagle to the top of the Liberty Pole," said Joseph Almeida, Facilities Manager for the City of Portsmouth. "The Portsmouth Liberty Pole is the oldest in the country and now the restored eagle completes the picture with the repainted pole."

In 1824 a carved and gilded pine eagle was placed atop the Liberty Pole. When that was replaced in 1978 it was placed on display in the old Portsmouth Public Library and now stands at the foot of the central “Staircase to Enlightenment” at the library. The current mahogany and gold leaf eagle was carved by Ron Raiselis, master cooper and wood carver at Strawbery Banke and placed in 2002. The original carved and painted shield at the bottom of the Liberty Pole was added in 1857 and was placed on display in Sheafe Warehouse (along with the second eagle) when it was replaced in the 1970s.​ Portsmouth’s Sons of Liberty first placed a flagpole on the spot where the current flagpole stands on January 9, 1766. 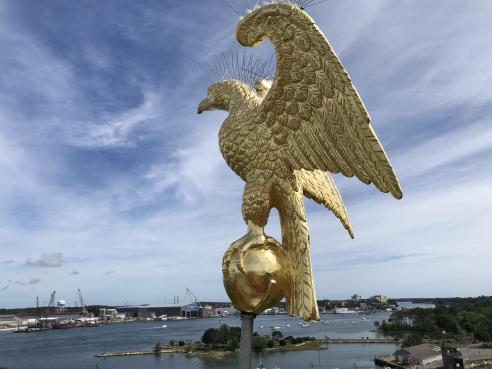