The Middle Street and Lafayette Road corridor bike lane project has been awarded to Hi-Way Safety Systems, and is required to be completed by the end of September 2018. The project, which also received funding from a NHDOT Safe Routes to School Grant, will extend from the High School to the downtown and is intended to create a safer and more convenient path for those traveling by bike or foot to the schools, Library and more.

The need for safer passageway for pedestrians and bicyclists along Route 1 was identified in the City’s Safe Routes to School Action Plan in 2010 as well as the City’s Bicycle and Pedestrian Plan, adopted in 2014. Since 2014, design concepts for this project have been developed and considered in numerous public input sessions.

After careful consideration of design plans and three rounds of bidding for this project, the City was pleased to get a reasonable bid from Hi-Way Safety Systems with the total contract costing $251,482. An additional $19,074 has also been budgeted for construction engineering that will be handled by the City’s consultant for this project, GPI. Most importantly, the City’s Safe Routes to School Grant from NHDOT totals $180,407, with the balance of $90,149 being funding from the City’s Capital Outlay funding.

According to Planning Director Juliet Walker, the implementation of these bike lanes will improve roadway safety and encourage citizens of all ages to select bicycling and walking as their more frequent modes of transportation. “As evidenced in our various plans and policies, this project has been long-awaited by many in the community. I’m very grateful for the passionate input along the way, as well as the patience as we worked to make financially sound decisions while implementing this project. Our current bike amenities and overall enthusiasm by the community have allowed for Portsmouth to be named a Bronze Level Bike Friendly Community according to The League of American Cyclists. This project and the ongoing participation will only elevate our accreditation and help sustain bicycle and pedestrian infrastructure for the future.”

Thus far, line striping spanning Andrew Jarvis Drive past South Street has already been completed by the contractor conducting work for the Andrew Jarvis Drive improvement project. Hi-Way Safety Systems has also started the installation of the pedestrian flashing signals at two intersections along Middle Street and adjusting the catch basins to accommodate bike lanes. Intersection improvements at South Street are also included as part of this project. Bike lane striping is scheduled to begin on September 14th; minor traffic delays may occur during this work.

For full background and final design plans for this project, please visit https://www.cityofportsmouth.com/planportsmouth/middle-street-lafayette-road-bicycle-pedestrian-corridor-project. 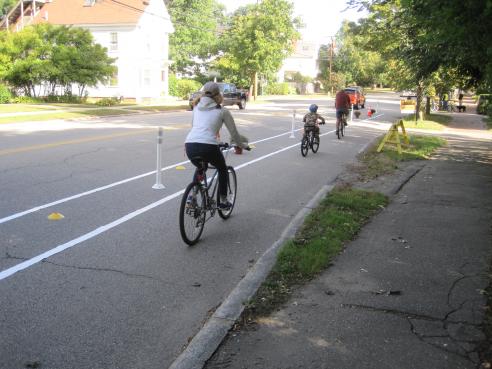