Click here for the video recording of the July 19 Special Meeting. 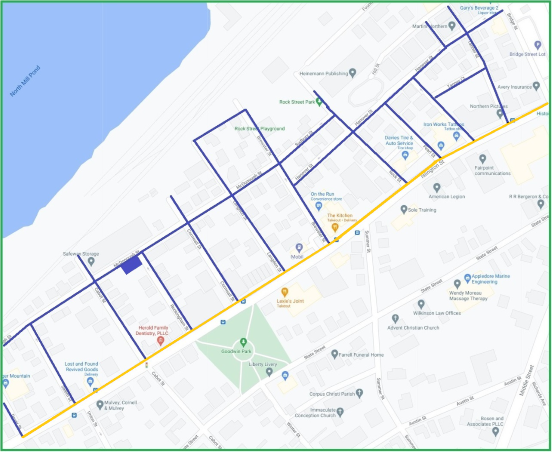 Proposed Rules and Street Maps for the Neighborhood Parking Program

After strong public input and interest expressed by the South End and Islington Creek neighborhood groups, City staff may launch pilot Neighborhood Parking Programs pending Council approval and further neighborhood support. At this time, the potential pilot program would likely take place in the Islington Creek neighborhoods for a duration of one year. Under an NPP program, people living in the neighborhood who wish to park on the street longer than the designated time limit would need to display a permit from the City on their vehicle, according to a draft of the program that was presented at the September 6, 2018 Parking and Traffic Safety (PTS) Committee meeting. Parameters of the program went before the PTS Committee on January 10, 2019 and is now before City Council.

The Department of Public Works and the Parking Division would like to thank participants from the Islington Creek and South End neighborhoods for contributing their thoughts during a series of Town Hall meetings held on 10.4.18 (Islington Creek Neighborhood) and 10.11.18 (South End Neighborhood). Communication with members of each community is vital to the development of a program that works best for each neighborhood’s specific needs.

Based upon the responses received through the Neighborhood Parking Program Online Survey, a set of Program Parameters was developed Meetings with representatives from each Neighborhood further refined those parameters, resulting in the iteration of the programs discussed at each of the Town Hall Meetings. Below you can access links to the handouts made available, which represent the iteration of the program discussed at each Town Hall Meeting.

If your neighborhood is considering becoming an NPP District, the following would be required:

In February 2018, City staff presented the logistics of a potential Neighborhood Parking Program (NPP) to discuss various factors and requirements involved to implement such a program. Following discussions at both a City Council Work Session, and at a Citywide Neighborhood Committee, the Parking Division released an online survey in Spring 2018 to collect thoughts and feedback from Portsmouth residents on a potential program.

The survey was an initial tool to not only receive public input but to assist residents in understanding the many factors to consider when implementing a Neighborhood Parking Program, such as associated costs and enforcement that could be involved, and how other groups such as Portsmouth workers and visitors might be affected.

The City received almost 400 responses to the survey. Below are a few proposed program parameters that were suggested by the majority of survey participants: