The NH Department of Environmental Services which is responsible for the NH regulatory standards with which all municipalities must comply issued this statement on what the NHDES described as "several non-enforceable health advisories for certain Per- and Polyfluoroalkyl Substances (PFAS).

The City of Portsmouth is currently in compliance with the New Hampshire Drinking Water standards for per- and polyfluoroalkyl substances (PFAS) in both the Portsmouth Regional and Pease International Tradeport Drinking Water Systems serving the following areas:

Annual Water Quality Reports for all these systems are sent to all water customers and posted here.

The City of Portsmouth’s water system tests for Poly- and Per- Fluoro Alkyl Substances (PFAS) in all of our sources of supply quarterly. Four PFAS chemicals are regulated by the NH Code of Administrative Rules, Chapter Env-Dw 700. These rules establish Maximum Contaminant Levels (MCLs), and compliance requirements for: PFOA, PFOS, PFHxS and PFNA. Currently all of the City of Portsmouth Water System sources are in compliance with the New Hampshire MCLs. 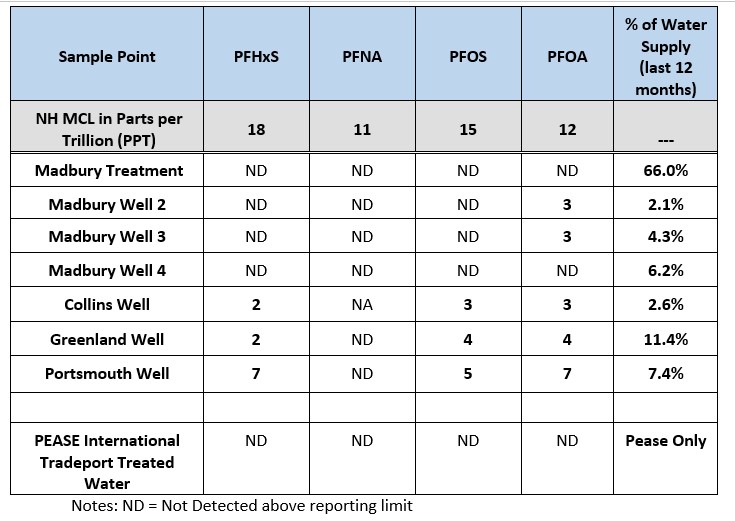 The State of New Hampshire has adopted enforceable drinking water Maximum Contaminant Level (MCL) standards for four per- and polyfluoroalkyl substances (PFAS); Perfluorohexane sulfonic acid (PFHxS), Perfluorononanoic acid (PFNA), Perfluorooctane sulfonic acid (PFOS), and Perfluorooctanoic acid (PFOA). Prior to the adoption of these standards, the State had been following the EPA’s Health Advisory standard of 70 parts-per-trillion (ppt) for two compounds, PFOS and PFOA.

The regulatory requirements and health advisories for PFAS compounds have evolved considerably since May 2014. When the Pease Haven Well test results were reported to us back then, the only guidance for PFAS compounds were the EPA’s Preliminary Health Advisories for PFOA at 0.400 parts-per-billion (400 ppt) and for PFOS at 0.200 parts-per-billion (200 ppt). According to the EPA’s information at the time these, “health advisories describe non-regulatory concentrations of drinking water contaminants at or below which adverse health effects are not anticipated to occur over specific exposure durations. They serve as informal technical guidance to assist federal, state and local officials, and water system managers by providing information on the health effects of and methods to sample and treat PFOA and PFOS in drinking water.”

On June 15, 2022 the EPA issued updated Lifetime Drinking Water Health Advisories for Four Perfluoroalkyl Substances (PFAS) from the US Environmental Protection Agency (EPA). According to their release, “EPA’s health advisories, which identify the concentration of chemicals in drinking water at or below which adverse health effects are not anticipated to occur, are: 0.004 parts per trillion (ppt) for PFOA, 0.02 ppt for PFOS, 10 ppt for GenX chemicals, and 2,000 ppt for PFBS. Health advisories are non-regulatory and reflect EPA’s assessment of the best available peer-reviewed science.”

The development of New Hampshire’s 2019 MCLs were described by the NHDES on their website with the following information:

To establish MCLs for PFOA, PFOS, PFHxS and PFNA, NHDES had to consider the extent to which the contaminants are found in New Hampshire, the ability to detect them in public water systems, the ability to remove the contaminant from drinking water, and the costs and benefits to affected parties that will result from establishing the standard, and then develop a MCL for each compound that is protective of the most sensitive population at all life stages.

Included with the final proposal, NHDES provided a summary technical report on the development of the drinking water standards (MCLs) including an explanation of the health risk assessment for each compound and information on cost, benefit, occurrence, and ability to detect and treat these chemicals.

The following table summarizes the EAP advisories and timeline of MCLs for the four New Hampshire regulated compounds, together with PFBS: 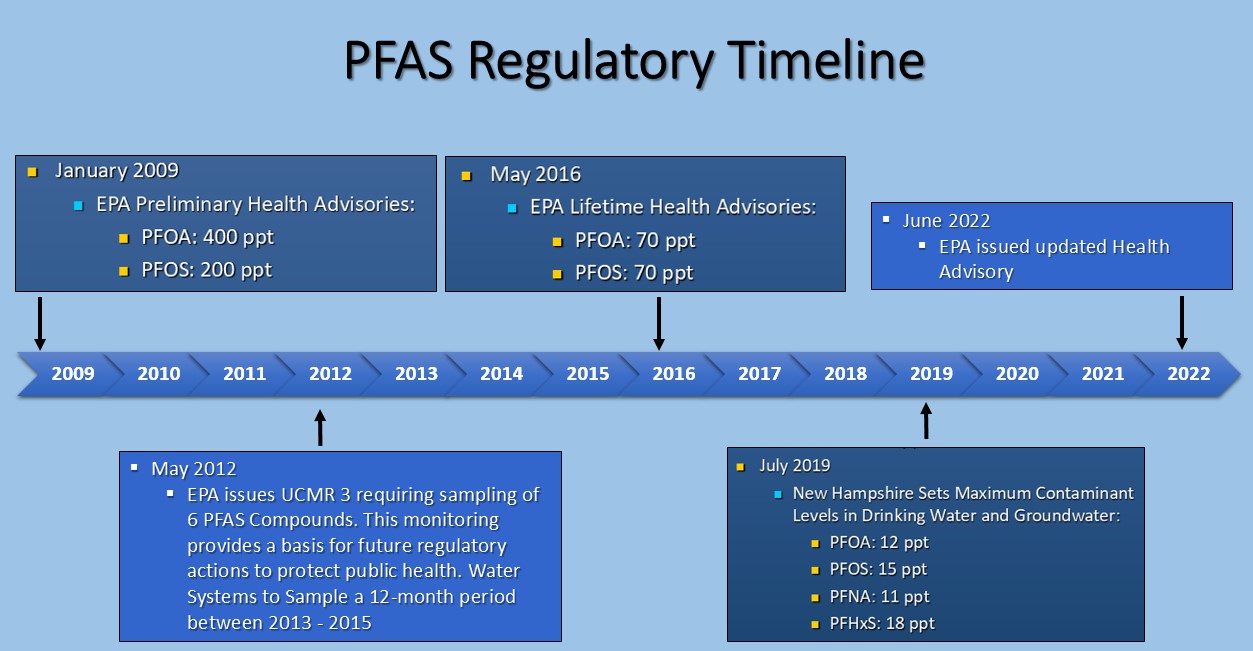 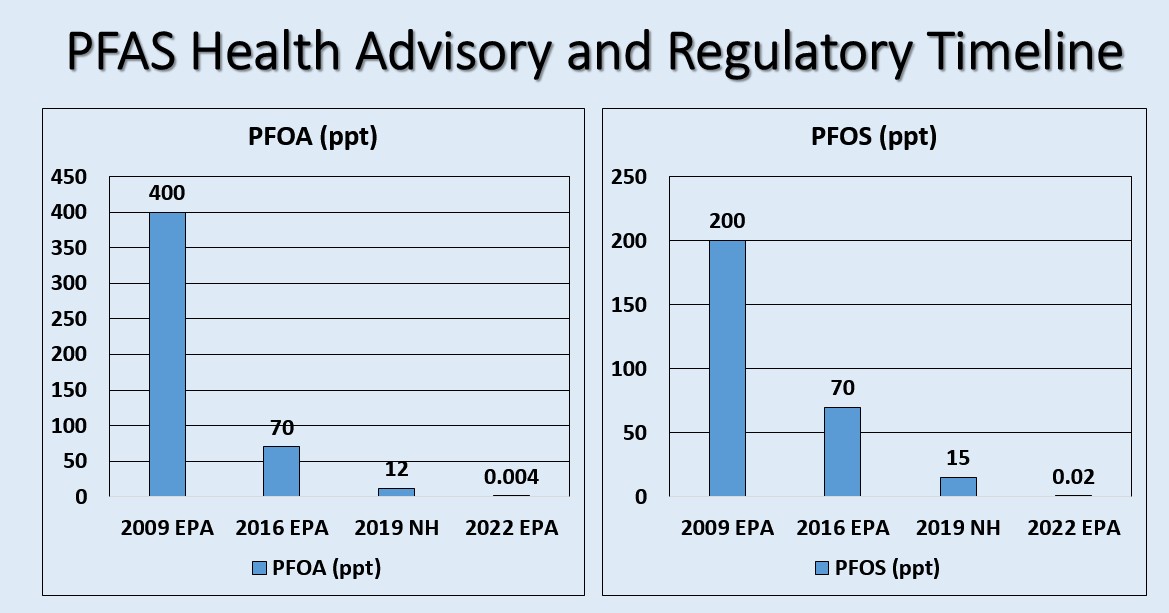 What is the difference between a Maximum Contaminant Level (MCL) Regulatory Requirement and a Health Advisory?

According to the EPA’s website regarding how health advisories and regulatory standards are set for drinking water contaminants:

Currently there are a number of contaminants that have been regulated by the EPA that have MCLs that are higher than the MCGLs. These include Arsenic, Uranium, Benzene, Carbon Tetrachloride and others.

The City of Portsmouth has proactively been sampling for PFAS compounds ever since the discovery of PFOS above the EPA’s provisional health advisory in the Pease Tradeport Water System’s Haven Well in May 2014. The well was contaminated by the use of fire-fighting foam at the former Pease Air Force Base. That well was shut down and a comprehensive investigation into the source and extent of the contamination was undertaken. A monthly monitoring program of the Pease supply wells was also implemented. This program included monitoring of the City of Portsmouth’s Collins and Portsmouth wells. Sampling at that time included not only the six compounds that the EPA was soon to require large systems to sample, but a total of 23 compounds to provide a better understanding of the extent of the contamination.

Similar to regulatory standards, laboratory methods and detection levels have evolved over time to enable ever lower detection capability. This is why some sources of supply that previously were “non detect” for some PFAS compounds early in the sample process now have low levels of PFAS detections.

Due to the levels of PFAS in the Portsmouth, Collins and Greenland Wells, the City has engaged the services of our consulting engineer to prepare preliminary design of treatment systems for those sources of supply. 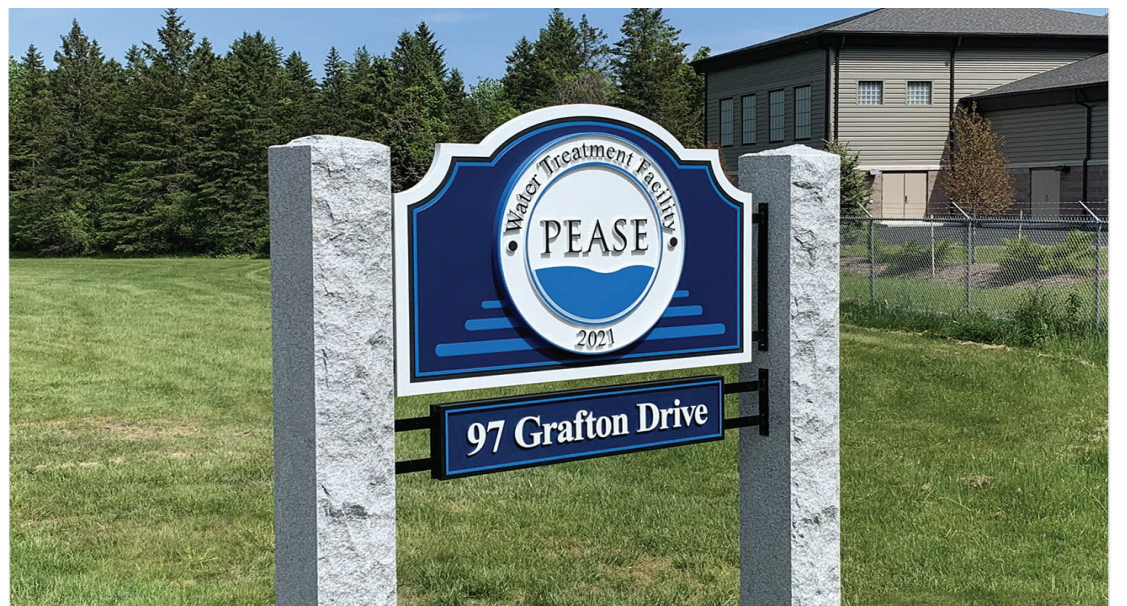 Construction of a new Pease Drinking Water Treatment Facility was substantially complete in April 2021. The treatment process at this facility includes both ion-exchange resin and activated carbon filtration systems for the removal of PFAS. Water from the Harrison and Smith wells have been continuously treated through granular activated carbon (GAC) since 2016. The ion-exchange resin filters were added to the treatment system on April 20, 2021, and have since been removing PFAS from the Harrison and Smith well water.

The Haven Well, which had been out of service since the discovery of PFAS contamination in 2014, was reactivated and approved as a source of water for the Pease Water Treatment Facility in July 2021. Since August 3, 2021, water from Haven Well has been treated along with Smith Well and Harrison Well water through the Pease Water Treatment Facility. Over a four week startup testing period, samples were collected weekly and analyzed for PFAS from each ion-exchange resin filter and from the granular activated carbon filters. Samples are now being collected monthly throughout the treatment process and analyzed for PFAS. Samples are analyzed with EPA Method 533 which provides results for 25 PFAS compounds, of which four are regulated by the NHDES for drinking water. There have been no detections of these compounds in the water entering the distribution system from the treatment plant since it has been in operation.

The Safe Water Advisory Group (SWAG) was founded by Council action on October 5, 2020, the group's stated mission is to:

For the latest information on SWAG please click here.

The attention to PFAS in drinking water, and other products, has grown considerably since it was first discovered at the Haven Well in May 2014. Pease was one of the first sites in the nation to have to respond to PFAS contamination caused by fire-fighting foam. Since then, many other prominent sites in New Hampshire and across the nation have discovered the presence of these compounds in their groundwater and drinking water. However, other research has revealed PFAS to be present in:

With regard to drinking water in particular:

The City of Portsmouth’s water operations staff continues to monitor and address this evolving issue through ongoing research, monitoring and system upgrades as necessary. Because Portsmouth was one of the first to address this issue, the City has had the opportunity to explore, pilot and implement treatment technologies to ensure that the drinking water delivered to City water customers meets regulatory requirements. The City of Portsmouth is also fortunate that local and Congressional delegations are supportive and that the Air Force is a willing partner in responding to the contamination discovered at Pease.

Technologies and regulatory requirements are likely to continue to evolve. The City continues to implement necessary and feasible actions to respond to and comply with regulatory standards. Links to the regular reports to the City Council, Safe Water Advisory Group and Pease Restoration Advisory Board meetings and at various water conferences are compiled on this webpage.