As the graphics show, the Seacoast area of New Hampshire continues to be in an Extreme Drought. Recent rains in October helped to replenish the reservoir and groundwater a bit, however, as the graphic shows, we are almost ten inches below normal for the last twelve months, or 81 percent of normal. Currently, halfway through November we have received only an inch of rain. There has been a lot of weather activity and storms around us, they just haven’t come directly our way or amounted to a whole lot of precipitation. If substantial recovery from the drought does not occur prior to next summer’s irrigation season then water restrictions will likely be necessary.

City water operations staff continue to participate in the New Hampshire Drought Management Team meetings, the most recent one was held on November 5, 2020.
Additional information and data can be accessed at the following NHDES website:  https://www.des.nh.gov/organization/divisions/water/dam/drought/documents/20201001-drought-team.pdf

The State Department of Environmental Services has implemented the State’s Drought Management Plan to coordinate the State Drought Management Team of state, federal, regional and municipal agencies, including the Portsmouth DPW Water Division. Ongoing actions include: assessing reservoir impacts and adjusting operations, working with drinking water systems statewide and ensuring the public is informed of the impacts and conservation measures that should be employed now to avoid serious problems later in the summer. The City of Portsmouth’s Water/Stormwater Division encourages residents to “Think Blue” and consider some of these water-saving measures you can practice at home, including potentially replacing inefficient toilets and washing machines:  https://www.cityofportsmouth.com/publicworks/water/water-efficiency

PRECIPITATION TREND
As shown in the previous graphic, our precipitation since October 2019 is below normal. The fall of 2019 and  spring of 2020 was fairly wet and helped our surface and groundwater sources of supply to be near normal conditions when the summer began. Our water supply conditions in our system reflect this, with our groundwater supplies doing a bit better than they were during the drought of 2016. However, the drought of 2016 ended in October when storms contributed over 7 inches of rainfall that year. Currently, there are no projections for similar storm events in the weather forecast, however, this is New England so anything could happen. If it remains dry our water supply staff are currently preparing contingency plans such as activating our Madbury Well #5 which was recently permitted and implement other contingencies. The loss of the Haven Well is still impacting our operations. That well is anticipated to be reactivated next summer when the Pease Grafton Road water treatment system is complete.

RIVER FLOW AND RESERVOIR LEVEL
Portsmouth Water System operators track the USGS stream flow gauges in the Oyster River and Lamprey River to assess flow conditions. These gauged watersheds are used to assess the relative recharge to the Bellamy Reservoir through its tributaries, the Bellamy River and Mallego Brook. The recent rains helped the reservoir recover a bit. The water level is currently 2 feet below the spillway. As the following graphic shows, the water level this year was nearly as low as it was during the historic drought of 2016. The rainfall in the second half of October helped the level recover somewhat. Currently, with cooler weather and some precipitation, the water level is holding steady. 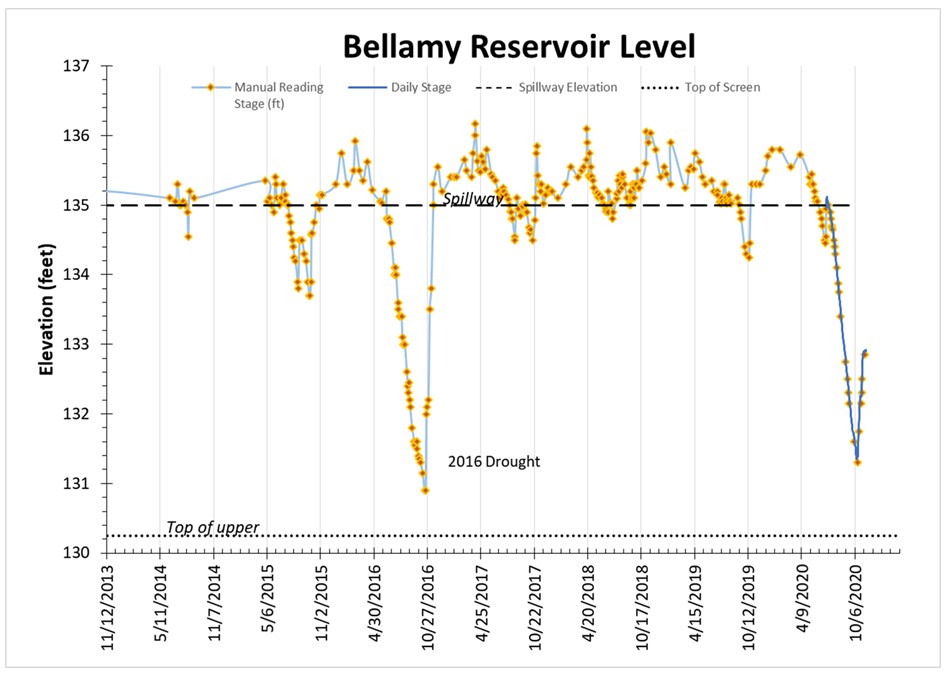 WATER QUALITY
The Portsmouth Water Division routinely monitors water quality parameters and performs water quality sampling and analysis as directed by the Federal Safe Drinking Water Act and the New Hampshire Department of Environmental Services. Water sources are monitored for radioactive, biological, inorganic, volatile organic, or synthetic organic contaminants. Critical water treatment parameters for turbidity, pH, chlorine, orthophosphate and fluoride are continually monitored and tracked by our system operators. The regulations require us to monitor for certain substances less often than once per year because the concentrations of these substances do not change frequently. In these cases, the most recent sample data are reported, along with the year in which the sample was taken. Annual Water Quality Reports for both water systems detail these efforts. The reports for 2019 were recently mailed to each water system customer.  They are also available at: https://www.cityofportsmouth.com/publicworks/water/drinking-water-quality


PFAS TRACKING AND RESPONSE
Our efforts to track and treat the PFAS contamination at the Pease International Tradeport continue. PFAS stands for a broad group of perfluoroalkyl and polyfluoroalkyl substances, produced and found in many commercial products and also used in firefighting foam. In response to the discovery of PFOS in the Haven Well in May 2014 at levels that exceeded the EPA Provisional Health Advisory (200 ppt at that time), the Haven Well was removed from service. This well has remained disconnected from the Pease Tradeport water system since this finding. The source of the PFAS at the Tradeport was aqueous film-forming foam that had been used to extinguish fires and in training exercises at the former Air Force Base. Since 2014, the Harrison Well and Smith Well on the Pease Tradeport water system, and Portsmouth Well #1 and Collins Well in the Portsmouth water system, have been routinely monitored for PFAS by the Air Force.

Activated carbon filters continue to treat the Harrison and Smith wells at Pease. A new treatment facility is currently under construction to treat those two wells together with the reactivation of the Haven well when the construction is completed in the summer of 2021. PFAS tracking of the other Portsmouth surface and groundwater drinking sources continues on a quarterly basis and all data is posted on the city’s website.

The City has been and will continue to sample PFAS quarterly according to assure compliance with New Hampshire’s new regulatory standards for four regulated PFAS compounds – PFOA, PFOS, PFHxS and PFNA.

SAFE WATER ADVISORY GROUP
The City Council voted on October 5, 2020 to create a Safe Water Advisory Group. This group will meet to gather advisory input from local stakeholders, scientists and activists focused on the PFAS (Per- and Polyfluoroalkyl Substances) contamination that has impacted the City of
Portsmouth with legislative, health advisory and fiscal changes. The mission of this committee will be to review and communicate the latest science on the health and environmental effects of PFAS, to monitor federal and state level legislative changes, and to anticipate policy changes that could impact the city of Portsmouth. Participants will include two City Councilors, two to four community members, one Portsmouth Firefighter, two to three City of Portsmouth staff (Public Works, Health), one Portsmouth School Board member, one medical professional, one to two NH State legislators representing Portsmouth. Proposed activities of the group will include conducting reviews of periodic City well monitoring results, legislative trends in NH and other states, and current science on PFAS exposure. They will provide periodic reports back to the City Council as needed. It was suggested that the group meet quarterly or every other month. The first meeting is anticipated to occur virtually in early December.

FURTHER UPDATES AND INFORMATION
This information will be distributed electronically on the City of Portsmouth’s website at:  https://www.cityofportsmouth.com/publicworks/water

If anyone needs additional information or has questions contact Al Pratt, Water Supply Operations Manager at 520-0622 or Brian Goetz, Deputy Director of Public Works at 766-1420.