The City’s Peirce Island Wastewater Treatment Facility is undergoing an upgrade. This project will convert the existing primary treatment facility to a secondary treatment facility with the ability to remove nitrogen. The project began in September 2016 and will continue until 2020. Details on the construction schedule and aerial photographs and videos of the construction can be seen by Clicking Here

A new headworks facility is currently under construction at the Pease Wastewater Treatment Facility.  The function of this facility is to provide preliminary treatment designed to remove rags, debris, and grit from the wastewater before it enters subsequent phases of treatment.  The facility, which is expected to be completed in early 2020, consists of automatic screening equipment, new electrical controls, and four new pumps with a peak hydraulic capacity of 4.3 million gallons per day (MGD).  Other facilities improvements part of this project include the addition of two new carbon odor control scrubbers that will treat foul air removed from the new headworks building, sludge processing areas, septage receiving system, and primary clarifiers. 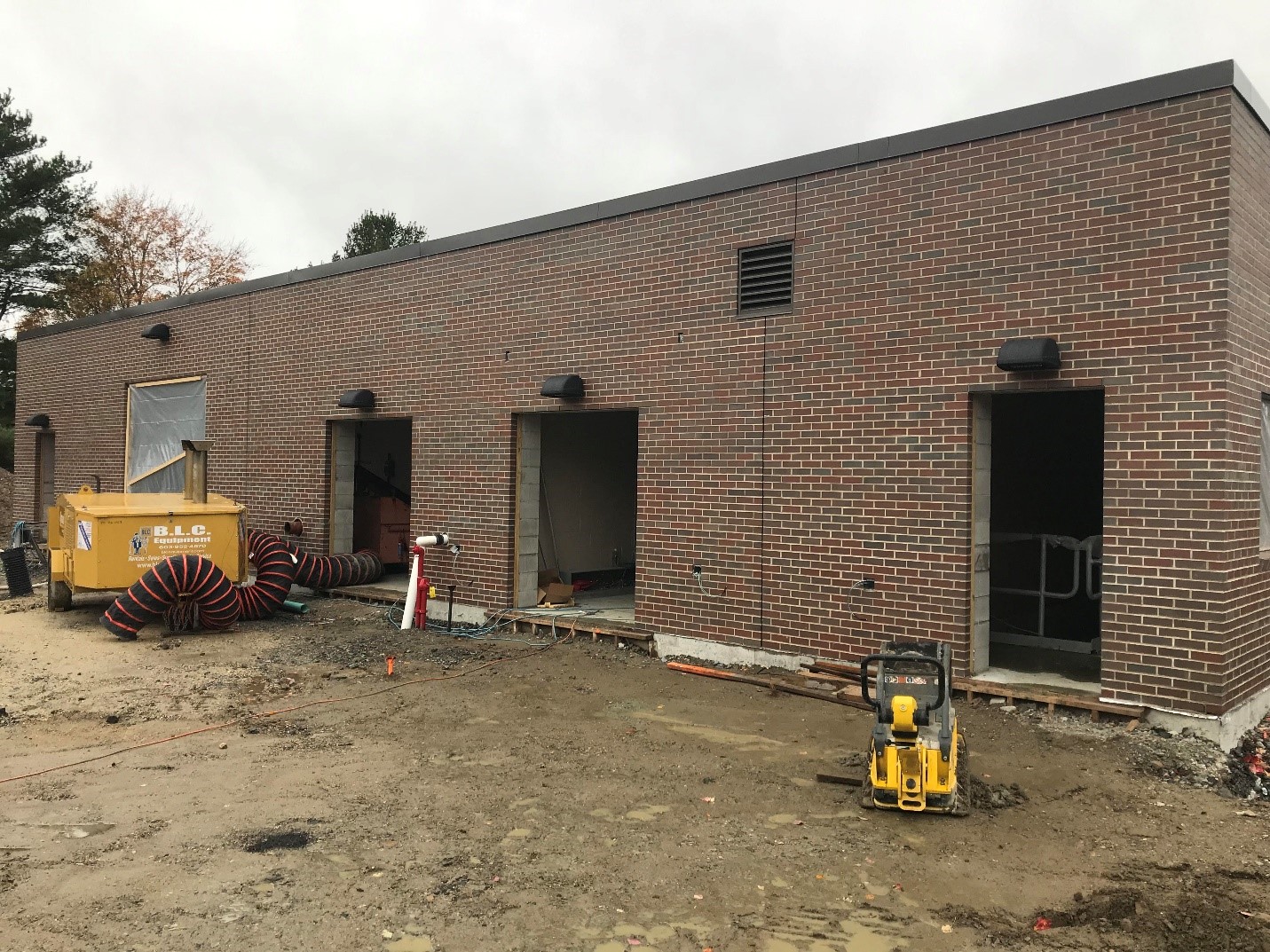 This project includes the reconstruction of Fleet Street from Hanover Street to Court Street. This work will include roadway reconstruction, replacement of sidewalks, utility work including new storm drains, sanitary sewers, and water mains. The planning for this work will include planning for utility corridors and sewer separation in the Fleet Street area extending to Market Square and to Maplewood Avenue.

This project includes the reconstruction of Union Street from State Street to Middle Street. This project is part of the City’s continued sewer separation to reduce combined sewer overflows. The work will include roadway reconstruction, replacement of sidewalks, utility work including new storm drains, separate sanitary sewers, and water mains. The planning for this work will include an evaluation of the alignment for new drainage down Middle Street. This will provide an outlet for the stormwater discharge.

In accordance with a September 2016 Peirce Island WWTF Consent Decree the City has begun planning a "2.5 million sewer extension project to provide public sewer service to approximately 83 existing parcels adjacent to our near Sagamore avenue, as depicted in the February 2011 Wright Pierce figure titled "Town of Portsmouth, New Hampshire Sagamore Ave South Sewer Extension Study, Low Pressure Sewer," with the intent to improve water quality at Sagamore Creek." The Consent Decree signed in September 2016 states that "Planning, design and other pre-construction activities for the project shall be completed prior to substantial completion of the Peirce Island WWTF upgrade project. Construction of the sewer extension project shall begin no later than June 30,2020 and shall be substantially completed on or before June 30, 2022."

A public information meeting on September 4, 2019 discussed the design of a new Low Pressure Sewer System (LPSS) ib Sagamore Ave North and the surrounding unsewered roads. The roads in the design include Sagamore Ave,m Shaw Road, Cliff Road, part of Walker Bungalow Road, Sagamore Grove and Wentworth Road, as shown on the map below.

For more information on this project, including links to reports and resources, click here. 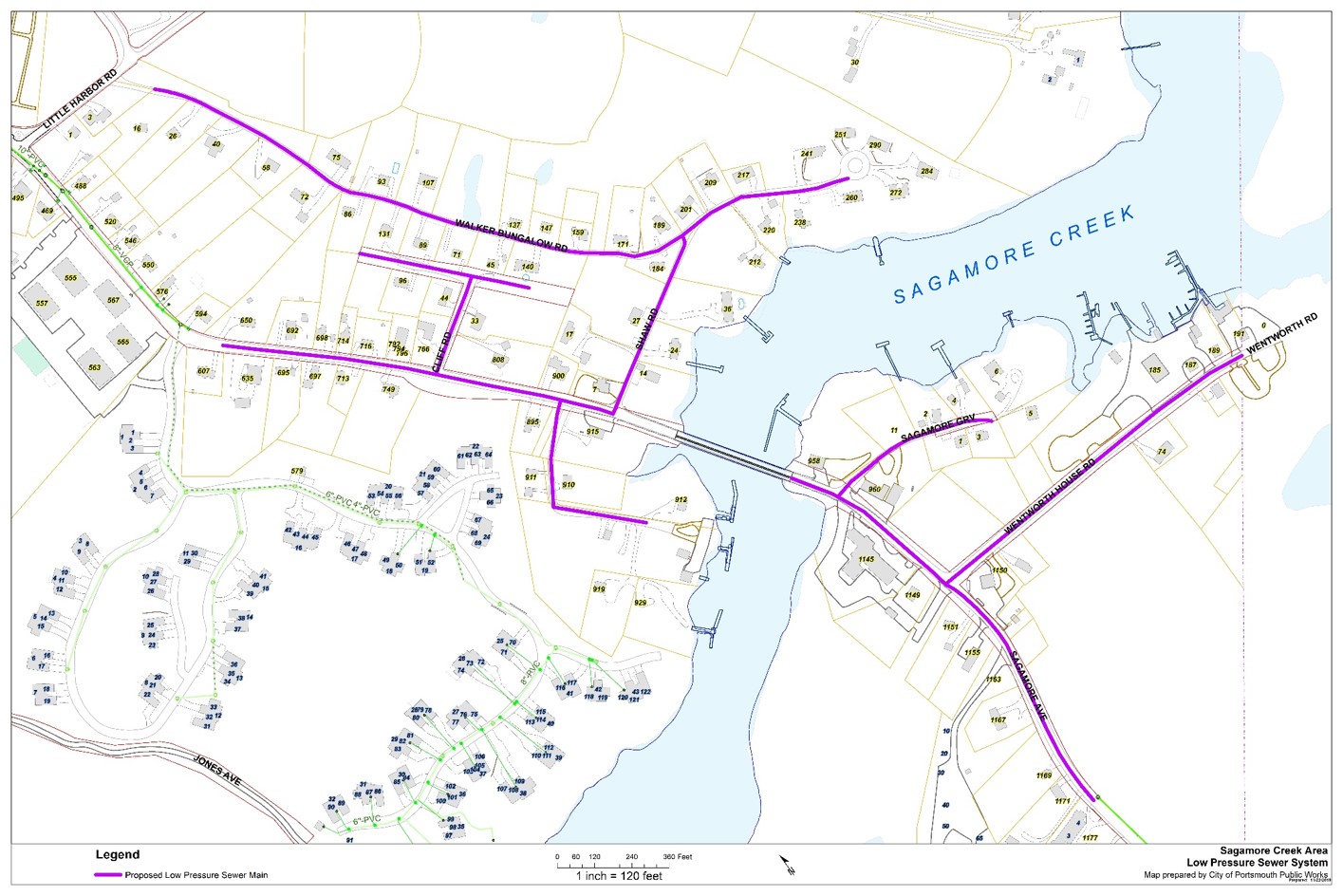