The City of Portsmouth’s original sewer system dates to the mid-1800’s. The original collection system discharged sewage directly into the North Mill Pond, South Mill Pond and the Piscataqua River. This was problematic for public health and significant modifications were made to the system in the 1960’s. This work was performed in parallel with regulatory requirements and changing regulations related to water quality. The system modifications that began in the 1960’s included, construction of a treatment facility at Peirce Island and pumping stations in the collection system to eliminate the direct discharges to the river. With these changes, there were still capacity limitations and so there were a number of relief points allowed in the collection system. These relief points allowed excess capacity in the combined collection system to discharge to a nearby water body and are now referred to as Combined Sewer Overflows. At one time there were 14 combined sewer CSO's. Today, only three combined sewer overflows exist. The discharge from these outfalls during wet weather events is authorized by permit with the Environmental Protection Agency.

Today the City owns and operates approximately 120 miles of sewers (public gravity sewers and force mains, not including laterals), which convey wastewater to the Peirce Island Wastewater Treatment Facility (WWTF) and Pease WWTF.

Sewerage systems are classified as separated or combined. The collection system at the Pease International Tradeport is a seperate sewer system. The collection system that discharges to the Peirce Island WWTF is a combined system; currently 80% separated and 20% combined. To reduce combined sewer overflow volume from the combined collection system, the City has been implementing sewer separation projects over several decades. The City has invested $55 million in overall CSO abatement activities since 1997. The figure demonstrates the areas of some of the many sewer separation projects completed in the City. It also shows planned sewer separation work that will continue as part of the City Consent Decree with the Environmental Protection Agency through a Supplemental Compliance Plan. 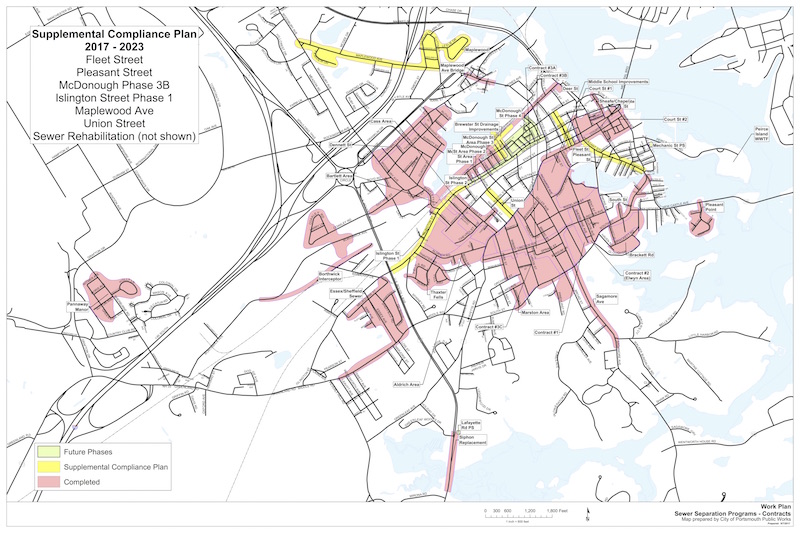 The City plans for CSO reduction through its Long Term Control Plan (LTCP). The LTCP is a document that the Environmental Protection Agency requires communities with combined collection system to have and allows for long term implementation of cost effective solutions for CSO reduction. The City’s first Long Term Control Plan was completed in 2002, but came after the completion of many other collection system related studies dating back to the 1950’s. The LTCP is regularly updated after the completion of major projects. The most recent version was the LTCP update in 2010. The next anticipated update is 2023 following the completion of sewer separation projects in the City’s Supplemental Compliance Plan, which are shown in the figure.

The City’s Sewer Division has made available a twitter account, @PortsmouthCSOs, for the purpose of alerting residents of CSO events. If an overflow is detected in any of the measuring devices in the City’s three active CSO locations, the City will tweet to the public; this notification will only be provided for the start of an event. The City formally had a service that automated tweets in real-time as CSO events occured, but that service has unfortunately discontinued; therefore, there may be a slight delay in the tweet notifications.

If you would like to receive alerts in real-time, please also sign up for our email list below. Your email will be added to a list in which our measuring devices will email you directly as events occur.

When these alerts occur, swimming in the water near these overflows is not recommended and should be avoided for 48 hours following the completion of a precipitation event. See Frequently Asked Questions for more information. If you have questions regarding these notices, please contact Public Works at 603-427-1530.

What is a Combined Sewer?

Combined sewers carry sewage and stormwater runoff in the same pipe to a wastewater treatment facility (WWTF). During large precipitation events the pipes can get overwhelmed. These types of sewer systems have relief points call Combined Sewer Overflows.

What are Combined Sewer Overflows (CSOs)?

Where and how many CSO locations are in the City?

There are three (3) active CSO locations in the City that are permitted by the Environmental Protection Agency. 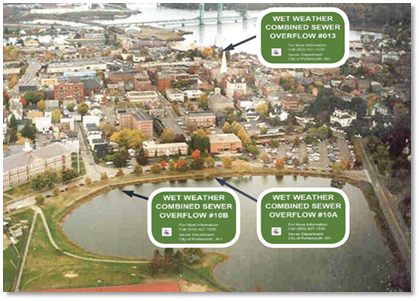 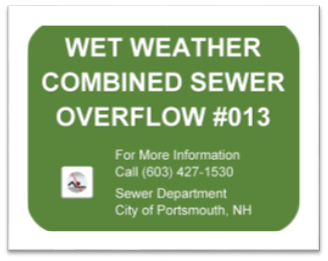 Can I or my pet swim in the water at South Mill Pond?

Swimming is not permitted at the South Mill Pond during a rain storm and 48 hours following a rain storm. The City does not recommend swimming at other times because the water body is not routinely monitored for water quality and may not be suitable for swimming. Designated swimming areas that are part of the New Hampshire Department of Environmental Services Public Beach Program are routinely monitored and we recommend those locations for recreational swimming.

Where can I see the history of CSOs?

The City monitors the volume of discharge from every CSO event. The volume of overflow varies based on the duration, intensity and depth of the rain storm. A CSO does not occur every time it rains. There are other conditions such as frequency of rainfall and groundwater conditions (e.g. frozen, saturated, snow pack, etc.) that have impact on the probability of a CSO discharge event.

Who do I contact to report a CSO issue?