The U.S. EPA and NHDES created the Protect Your Tap: 10-minute lead test, an online guide that walks homeowners through a series of steps to see if they have lead pipes bringing water into their home, how to reduce their exposure to lead and how to get their water tested. If you would like to share the guide with your community, please contact Amy Rousseau at (603) 271-0893 or amy.rousseau@des.nh.gov for more information.

The City of Portsmouth implemented a Lead & Copper Corrosion Control Program in 2003 and has been in compliance requirements since its inception.  Recent sampling conducted in 2020 of 31 taps throughout the Portsmouth water system resulted in only four locations with measurable concentrations of lead and 27 locations with no lead detected.

The general purpose of the Lead & Copper Corrosion Control Program is to minimize the potential for water supplied by the City to leach potentially harmful metals such as lead and copper from pipes, fixtures and solder containing lead. The primary source of lead and copper in drinking water is plumbing systems in houses and other privately owned buildings. The City of Portsmouth water supply sources do not contain measureable quantities of lead.

The following is a summary of the lead and copper compliance testing results and sampling schedule for the Portsmouth Water System since the Corrosion Control Program has been in place: 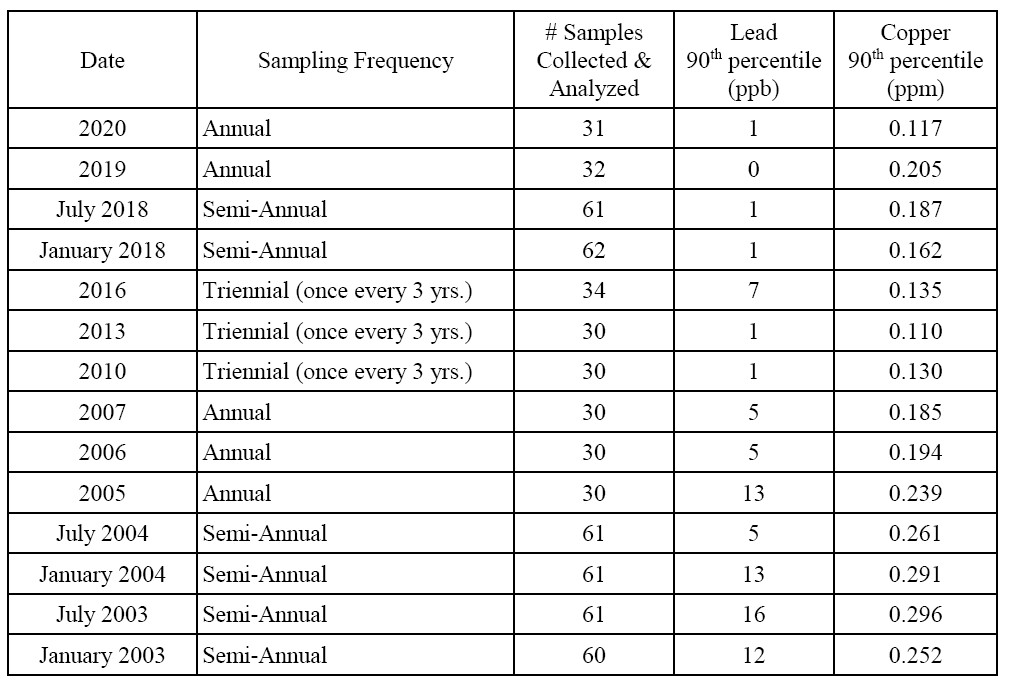 Health impacts due to the consumption of lead or copper via drinking water have been well documented. Lead exposure is known to cause internal organ damage, behavioral disorders, an increased risk of heart disease, and an interference with physical development of infants. Copper has the potential to cause gastrointestinal disturbance from short-term exposure and liver or kidney damage from long-term exposure. In response to these health impacts, the EPA set maximum levels to protect public health at 15 parts-per-billion (ppb) for lead and 1.3 parts-per-million for copper, respectively at the 90th percentile of public water system samples.

To reduce the potential for City water to leach lead and copper from plumbing systems, a corrosion control inhibitor is added to the water supply. The corrosion inhibitor used by the City of Portsmouth is an orthophosphate/polyphosphate blended chemical that is a National Sanitation Foundation (NSF) Standard 60 additive approved for drinking water. The inhibitor creates a coating on the walls of distribution pipes and house plumbing to minimize the potential for metals (including lead and copper) to leach from pipes into the drinking water. It adds no noticeable taste to water. The optimized concentration in the Portsmouth water distribution system is 1 mg/L – as orthophosphate.

Portsmouth Water Treatment Operators continuously monitor the concentration of orthophosphate in the system. Automated analyzers, field measurements and laboratory verification samples are analyzed to ensure optimized concentrations are maintained in the system. Water quality parameters that are factors in the corrosivity of water include alkalinity, hardness, dissolved solids, and pH. These parameters are monitored quarterly from the supply sources and selected locations throughout the distribution system.

As part of the Corrosion Control Program development, locations of representative residential household sampling sites were identified based on the three tier priority ranking defined by the US Environmental Protection Agency (USEPA). Only those sampling sites that are approved by the New Hampshire Department of Environmental Services (NHDES) can be used for compliance sampling. The tiered priorities are based upon the following site characteristics:

During the first two years of the Corrosion Control Program, lead and copper compliance samples were collected two times per year at the 30 selected sampling sites. Upon confirmation of the effectiveness of the Corrosion Control Program, sampling was reduced to annually from 2005 through 2007, and to every three years thereafter.
In 2018, due to the upgrade at our Greenland Well facility, the City of Portsmouth was required to sample 60 residences for lead and copper twice in 2018 (January to June, and July to December). This sampling requirement has now been reduced to 30 residencies, every year.  The City of Portsmouth Water Division collected samples in 2019 and the most recent round of lead and copper samples were collected in the third quarter of 2020 (July to September).

Thirty-one sites were sampled in 2020. Of these, 27 sites were “non-dectect” for lead, three sites were below 5 ppb, and one site, which was the highest measured concentration this year, had 7 ppb of lead.

All of the participants in the residential compliance sampling program receive results of the lead and copper analyses with an explanation. Lead and copper results are available on the NHDES OneStop website: http://des.nh.gov/onestop/index.htm

Information about Portsmouth’s Corrosion Control Program has been distributed annually since its inception. Lead and copper information is summarized on the Portsmouth Water Division Annual Water Quality Reports:
https://www.cityofportsmouth.com/publicworks/water/drinking-water-quality

Additional information about lead and copper corrosion control is available from the NHDES:  http://des.nh.gov/organization/divisions/water/dwgb/lead-copper/index.htm

And from the EPA:
http://www.epa.gov/dwreginfo/lead-and-copper-rule#additional-resources

Testing Lead in Drinking Water in Schools and Daycares

New Hampshire Senate Bill 247 was signed into law on February 8, 2018. This law requires, among other actions, that all schools and licensed childcare facilities test lead in drinking water at all locations where water is available for consumption by children. The first round of testing was required to be completed by July 1, 2019, and every 5 years thereafter, until at least 3 rounds are below the standard. Any locations showing 15 ppb or higher must be remediated.
City of Portsmouth water staff have previously assisted the City’s school department in a sampling effort performed in 2016. All Portsmouth schools had their water tested and any with detections were evaluated for plumbing replacements. 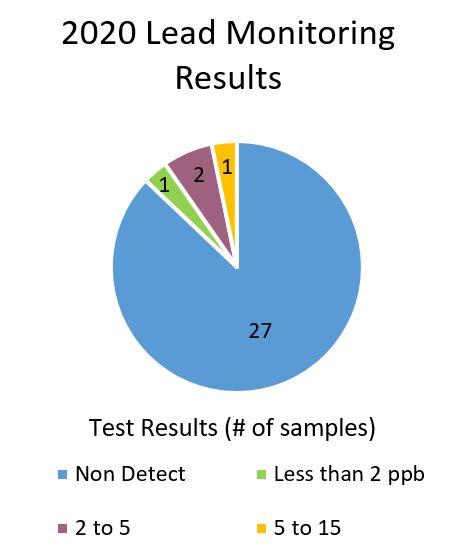