I began my tenure as a Portsmouth Police Officer in 1995 and was appointed as the Chief of Police in January of 2021. Portsmouth is known as a “mini-Boston” on the New Hampshire coast, and I am honored to bring my policing experience to the Chief’s Office as your Police Department continues to provide public safety for this wonderful city.

After starting my career in Patrol, I spent 9 years in the Investigative Division, starting as a Drug Liaison Detective and General Investigator.  I was then assigned to the New Hampshire Attorney General’s Drug Task Force and moved to the highly specialized Drug Enforcement Administration’s High-Intensity Drug Traffic Area Task Force (HIDTA).  I became a sergeant in 2008, and a patrol lieutenant in 2009, before moving to the position of Detective Lieutenant in 2013.  In 2018 I became Captain of Operations, and then Captain of the Administrative Division.  My career path has given me experience in all facets of police operations.

I am a graduate of the 2017 PERF Senior Management Institute for Police; the 2019 FBI LEEDA Executive Leadership Institute; and graduated from the 2022 FBI National Academy, 282nd Session.

I know this city well and can say that policing Portsmouth presents a number of unique challenges.  Our daily service population is roughly 65,000; we have well over 100 events annually, which can draw as many as 100,000 people to a single event; a school system with six campuses and more than 2,600 students; a major university right up the road; “beach towns” to the north and south; an international airport and Tradeport; a vibrant hospitality industry; and over 150 liquor licenses, the largest number per capita in the state. Portsmouth is experiencing rapid growth due to residential and commercial development and the demand for police services continues to increase along with the population.

Along with our police commissioners, and in addition to the high standards required by CALEA accreditation initiatives, the Portsmouth Police Department is currently engaged in public dialog and careful review of all facets of how the department delivers public safety justly and impartially to all who live, work, and play here.

I invite you to cruise around our website and take a look at the Strategic Plan.  In doing so, you will see the plans and high standards of a talented, forward-thinking command staff, and a culture of innovative and energetic employees.  Please enjoy our city – it is our pleasure to serve you. 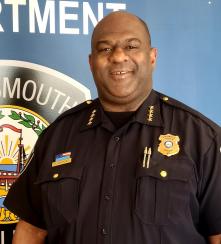