Twenty-one years after terror attacks on America destroyed the towers of the World Trade Center and surrounding area in New York City; heavily damaged the Pentagon in Washington DC; and caused the destruction of Flight 93 in Shanksville, PA, we will again pause and remember the world-changing events of September 11, 2001.

On Sunday, September 11th, 2022, police officers and fire fighters, along with the citizens they protect, will come together and commemorate the terrorist attacks in New York City, and Washington, D.C., and the bravery of the passengers that went down with their plane in Shanksville, PA.  We honor the heroism of fire, police and ordinary citizens as they responded to that catastrophe and the loss of 3,000+ people.

An observance will take place outside Police Headquarters/Portsmouth City Hall on the morning of Sunday, September 11th, 2022, at the site of the 9/11 Steel Artifact Memorial, to remember the sacrifices of the fallen heroes and victims and honor their memory.  The service will start at 8:46 a.m., the time the first plane hit the World Trade Center towers in New York City.

Businesses, residents, visitors, and especially children, are invited to join for the brief outdoor service.  You are encouraged to bring a flower or bouquet of any type to lay at the foot of the 9/11 Steel Artifact as a visible reminder of your attendance to honor the memory of these heroes and victims.

The remembrance ceremony will honor the 2,507 civilians, 72 law enforcement officers, 343 firefighters, 10 emergency medical workers, and 55 military service personnel who lost their lives, or gave their lives saving others.  Many first responders are still fighting for their lives, and others are losing their lives, as a result of their rescue work in the toxic ruins of the burning Ground Zero Towers.  Each year we lose a few more. The City of Portsmouth was directly impacted by the 9/11 attacks by the loss of American Airlines’ co-pilot Tom McGuinness, a Portsmouth resident, who was piloting American Airlines flight #11, the first plane used as a weapon by terrorists and flown into the tower.

Everyone is encouraged to take a few minutes and acknowledge the loss to the country and the victim’s families…mark the day, and remember…, so that WE WILL NEVER FORGET. 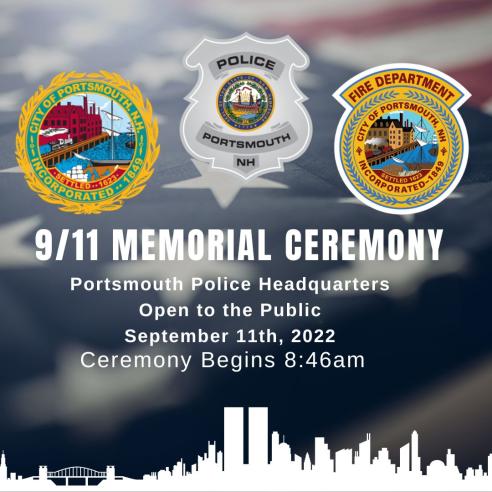