The City of Portsmouth owns and maintains six historic cemeteries; these cemeteries today exist as invaluable snapshots of the lives and final resting places of residents of our community over our nearly 400 year history. Recognizing this, in 2013 The City of Portsmouth and the Portsmouth Historical Society commissioned an existing conditions assessment report to begin the process of developing a long range restoration plan to maintain these historic resources for the benefit of future generations. The report is available at the bottom of this page and documents the existing conditions of the Point of Graves Burial Ground, the Old North Burial Ground, the Union Cemetery, the Pleasant Street Burial Ground and the Cotton Cemetery.

The Historic Cemetery Trust Fund was established in July of 2014 in order to act as a repository for all funds donated, received, or authorized by the City of Portsmouth to be used for the conservation, restoration, and repair of cemeteries, burial grounds, and burial sites owned by the City. The costs identified in order to fully restore the City's publicly owned historic cemeteries are significant, and those wishing to assist financially with this endeavor are graciously encouraged to address their contributions to The Trustees of the Trust Funds with a note that the donation is to be directed towards the Historic Cemetery Trust Fund.

Portsmouth’s African Burying Ground, which was likely used throughout the 1700s, is located under what is now Chestnut Street in downtown Portsmouth, on the then-undeveloped outskirts of town. As early as 1705, documents referred to the site as the “Negro Burying Ground.” Over time, as Portsmouth grew during the late 1700s and throughout the 1800s, the burying ground was built over and many forgot of its existence, except for a mention in the Portsmouth Black Heritage Trail.

The African Burying Ground was rediscovered in October 2003 when the buried remains of thirteen people were found during a City infrastructure project. Under the direction of the State Archaeologist and with appropriate protocols, the remains of eight individuals were temporarily removed with the intention of reinterring them at a later date. Subsequent DNA testing confirmed that those found buried at the site were of African descent.

It isn’t possible to determine with certainty how many of those buried here were enslaved, and how many may have been free. It is, however, very likely that many more individuals are buried on Chestnut Street, and it is the only known African burying ground authenticated by DNA testing, that dates to this era in all of New England.

In the spring of 2015 the City completed the stabilization and restoration of five chest and hill tombs in North Cemetery. These improvements, carried out by a conservation mason in coordination with Portsmouth Historical Society, were focused on making historically-sensitive improvements to arrest deterioration and stabilize each site. In addition, maintenance crews at Public Works completed tree removal and extensive tree trimming work to improve aesthetics as well as to better manage vegetation in the cemetery. Public Works also coordinated with large volunteer group, which resulted in the removal of over 80 bags of yard waste material from the North Cemetery. North Cemetery is also the home to an Adopt-a-Spot at its entrance.

In June 2015, City contractors began work on the restoration of the front enclosure fence of Union Cemetery on Maplewood Avenue, original to the site's establishment in 1844. The work is the largest improvement project to take place following the 2013 Assessment and Restoration Plan. The work, finished in August, included the temporary removal, cleaning and refinishing of the wrought iron fence components, and removal of the granite posts and beams for cleaning and eventual resetting. The entrance gate and sign was also restored.

One of the higher priority projects identified in the 2013 Assessment was reconstruction of the severely deteriorated Union Cemetery Receiving Tomb. The receiving tomb, which was not a burial site itself, was in a state of disrepair and was a known gathering place for illicit activities (monitored when possible). Addressing this tomb's condition was included in the 2013 infrastructure assessment. Together with a consulting conservation mason, the Historical Society, and the Division of Historical Resources, City staff found a historically-sensitive way to reconfigure the building remnants to return the site to stable condition. This work took place in conjunction with the completion of the fence work and included reusing the tomb materials to retain the architecturally-significant façade through the reuse of the existing granite roof pieces as structural supports. The existing brick was reused to pave the area behind the façade that denotes the footprint of the original receiving tomb location. The site no longer has a roof, but its presence is maintained as an architectural feature.

In August 2016, the City undertook reconstruction of the North Cemetery front enclosure wall, the highest priority repair project in the city's historic cemeteries, and one of the most costly. The existing wall was in poor condition and had become unstable, deteriorated beyond the point of restoration or repair. The 2013 Report recommended that the entire wall be carefully dismantled and rebuilt on a concrete footing using the original stones and concrete caps. Preservation mason Thomas Ahern deconstructed the 210-foot stone wall in front of the historic North Cemetery, arranged and/or numbered the hundreds of stones and is put it all back together again, one rock at a time. Ahern spent eight weeks restoring the wall. The North Cemetery burial ground is on the National Register of Historic Places

John Wendell (d. 1808) was a lawyer who moved to Portsmouth after graduating from Harvard and acquired considerable land holdings in New England. He was an early supporter of the Revolution, and an important literary and financial contributor to New Hampshire's stand against the British Crown. The Wendell tomb is a barrel vaulted hill tomb that was never completely covered over. Despite water infiltration for most of its existence and the poor condition of its exterior surface the existing tomb appears to be intact. The brick vault has been extensively altered and repaired over the last 75 years, but all of these repairs have failed. The vault's end walls were completely rebuilt using a mix of recycled and modern bricks, but the reconstructed brickwork was not built on the tomb's original foundation. This lack of support and physical connection to the older masonry structure allowed the newer brick wall to settle and lean away from the rest of the tomb, causing a three-to-four inch wide gap between the back of the rebuilt wall and the tomb to open up, threatening further degradation and possible structural collapse if significant repairs are not undertaken promptly. The project will stabilize the tomb architecturally and restore it to look as close as possible to its original design. 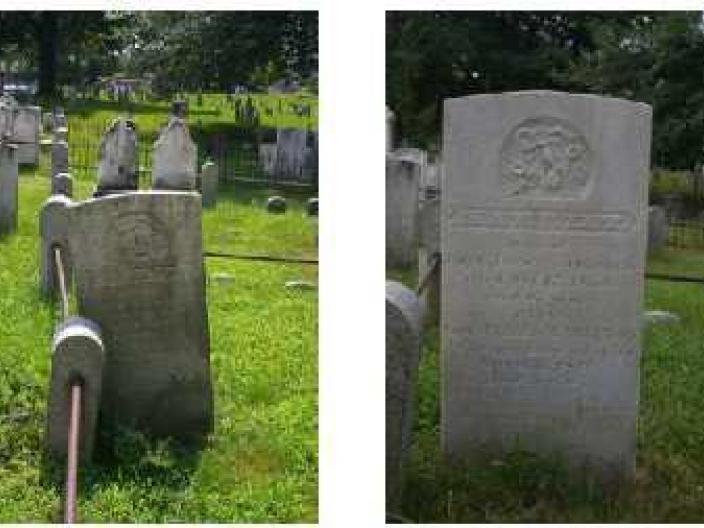 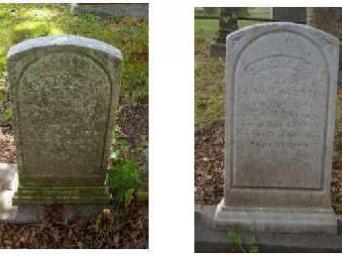 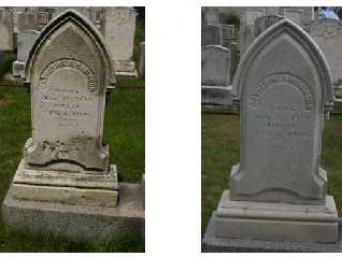 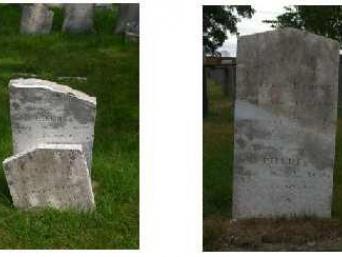 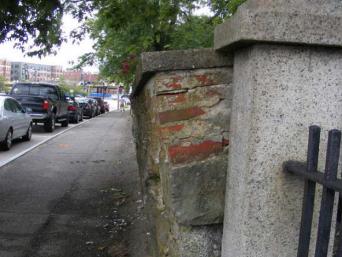