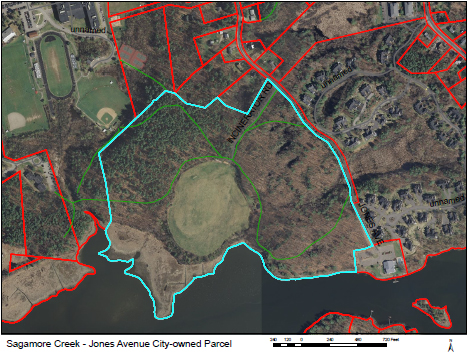 At the City Council meeting on December 8, 2014, the Blue Ribbon Committee on Sagamore Creek Land was established by the Mayor. The charge of the Committee is to develop a plan for public usage of the 66-acre city-owned parcel. A report back to the City Council shall be completed on or prior to December 21, 2015:

In a recent site walk of the Jones Avenue Landfill, NH Division of Environmental Services (DES) observed the gate to the capped landfill was open.  Residents are still able to enter the site and access the property through the gate at Jones Avenue.  The 1987 closure plan for the Landfill requires that the gate to the cap be closed and only opened for maintenance activities.  As a result, DES requested the gate be closed and locked per State of NH Administrative Rule Env-Sw 800.  As a result, a sign has been posted indicating the same and directs residents to the City's website to find out more information about the future of Sagamore Creek.

The gate closure action is taken not in response to any specific concern, but requested by DES because it was to have been closed as a requirement of the 1987 closure Plan.  The gates have been closed on and off since that time, but unauthorized infringement on the cap has been persistent.

In the coming months, the City staff will be working with DES to develop a modified Landfill Closure Plan which reflects the final report of the Blue Ribbon Committee on the Sagamore Creek Land adopted by the City Council in December 2015.  The report and master plan can be found below.  Formal access to the cap is a major component the Master Plan.  However, in the absence of an agreed upon new Landfill Closure Plan, the State is required to monitor the existing closure plan and its requirements.

If you would like to provide input electronically to members of the Committee, please use this web comment form below.