The City of Portsmouth has five economic revitalization zones (ERZ). The ERZ designation is an economic development tool allowed by state statute that creates incentive for companies to expand or relocate to an eligible area. Projects in an approved zone must create new full- time jobs and expand the economic base and can range from the creation of new facilities to the rehabilitation of existing structures. State approval of ER Zones qualifies businesses expanding or relocating in these ER zones for tax credits outlined in RSA 162-N:8. Under the provisions of this statute, businesses in an approved ER Zone may be eligible for tax credits to be used against Business Profit Tax and Business Enterprise Tax up to a maximum of $40,000 annually for a five year period. Below is a summary of the current ERZ areas in Portsmouth.

This ERZ area consists of all Pease Tradeport property within the City of Portsmouth boundaries and shown on City Tax Map. (See Map in Exhibit A). The Tradeport is and international business park easily accessible off Interstate 95 and Route 16. The Tradeport includes the Pease airport which provides passenger, fractional aircraft ownership, aircraft maintenance and cargo services. This location has been a significant factor in the decisions of Tradeport tenants to move to Pease for the ease of workforce commuting and for movement of manufactured products. Tradeport businesses collectively employ over 9,000 employees at close to 300 companies and, four of the City’s top ten largest employers are located at the Tradeport. The City authorized an ERZ application for this ERZ on August 3, 2009. The NH Dept. Of Resources and Economic Development approved the ERZ on October 28, 2009.

This ERZ area consists of all Portsmouth Office Park at Commerce Way shown on City Tax Map. (See Map in Exhibit B). Commerce Way is located in an office/research land use zone and includes 535,000 square feet of Class A office space. The property is conveniently located off Exit 7 of Interstate 95 and is just over a mile north of the city’s central business district. Historically, this location has been a determining factor in the location decisions of Commerce Way tenants. When applied for, the ERZ had a 59% vacancy rate. There is the potential in the future to develop approximately 20 acres of vacant land in the zone. The City authorized an ERZ application for this ERZ on June 21, 2010. The NH Dept. Of Resources and Economic Development approved the ERZ on July 27, 2010.

The Heritage-Constitution Industrial Park ERZ area consists of all Heritage-Constitution Industrial Park property within the industrial park boundaries and shown on City Tax Map. (See Map in Exhibit C). This area is located in an industrial land use zone and is also part of the designated Foreign Trade Zone #81. On the east side, the industrial park abuts the heavily travelled, State Route One Highway. This is a major north south vehicular corridor along seacoast New Hampshire linking Portsmouth to Rye, Hampton and Seabrook. On the west side, the industrial park abuts Banfield Road which ultimately brings traffic to Interstate 95 and Route 16. This location has been a significant factor in the decisions of tenants to move to Heritage-Constitution Industrial Park for the ease of workforce commuting and for movement of manufactured products. The City authorized an ERZ application for this ERZ on May 21, 2012. The NH Dept. Of Resources and Economic Development approved the ERZ on July 10, 2012.

The Central Business District ERZ is located in downtown Portsmouth and includes a portion of the City that was impacted by the Urban Renewal Program in the 1960’s when over 200 homes and an additional 200 buildings such as warehouse, residential and commercial buildings were demolished to make way for a hotel and shopping mall. (See Map in Exhibit D). The zone is located approximately 1 mile off Exit 7 off Interstate 95. The City’s Economic Development Commission voted to submit an ERZ application for this ERZ on September 9, 2016 and the NH Dept. Of Resources and Economic Development approved the ERZ on March 23, 2017.

The West End ERZ is located one mile west of downtown Portsmouth between Islington Street and Chevrolet Avenue. (See attached Exhibit F) It includes a portion of the City that underwent industrialization in the 1840’s and was once populated by warehouses, industrial and commercial buildings. In the mid 1800’s, beer and ale brewing supplanted many of the smaller shoe, textile and button industries in the area. The Frank Jones Brewery that once dominated the area closed in the 1950 and, as other industries in the West End industry declined, many of the industrial buildings in the proposed ERZ zone were demolished leaving tracts of undeveloped property and/or vacant facilities including the former City Public Works facility that was purchased by a developer and lay vacant until another developer purchased the property. The Portsmouth Economic Development Commission authorized the City Manager to apply for ERZ designation for West End ERZ on January 12, 2018 and the NH Office of Business and Economic Affairs approved the ERZ in May 2018. On January 24, 2022 the Portsmouth City Council approved expanding the West End ERZ to include the new West End Yards located between the Islington Street and the Route One Bypass. 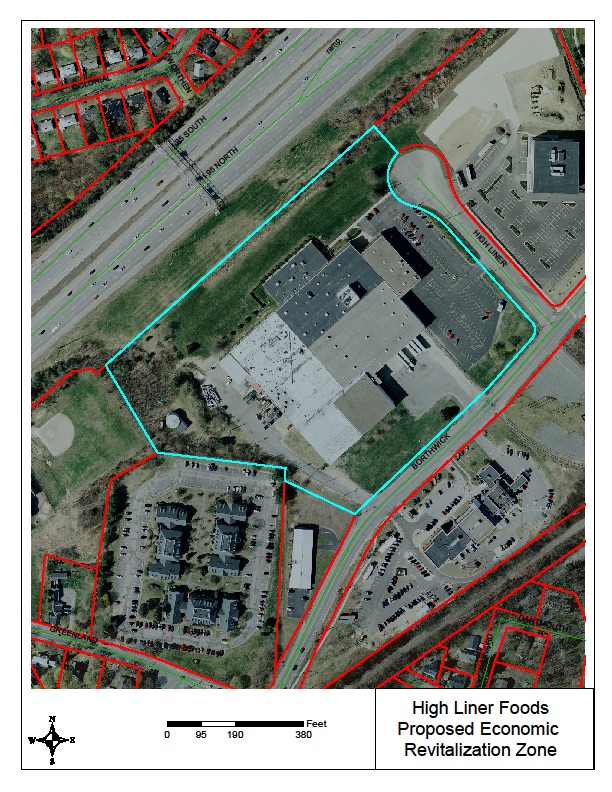 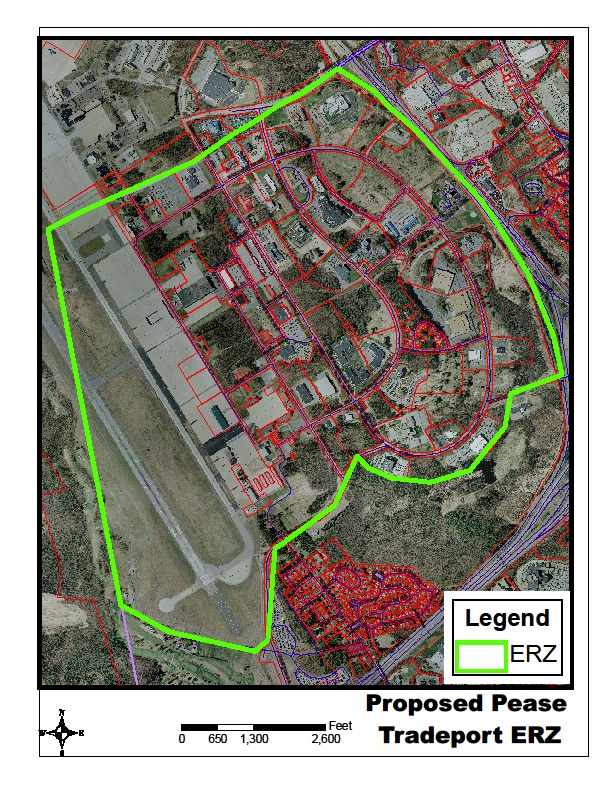 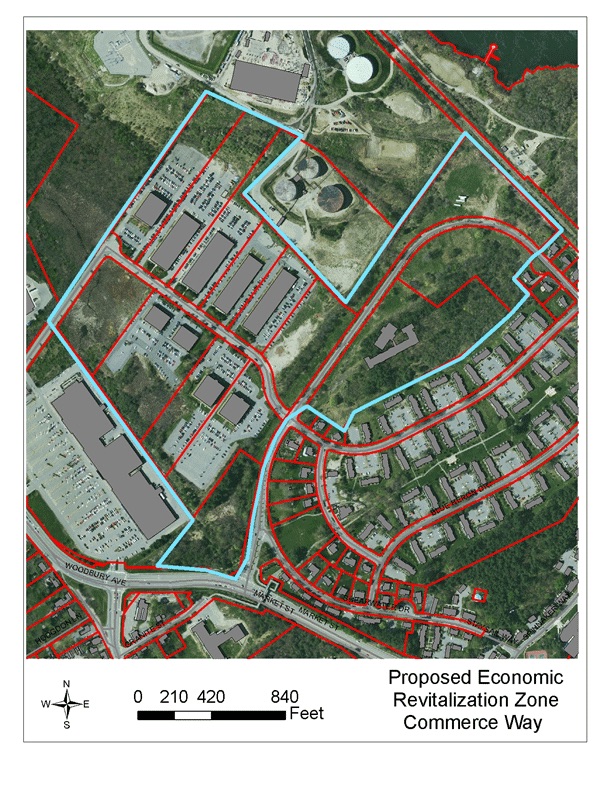 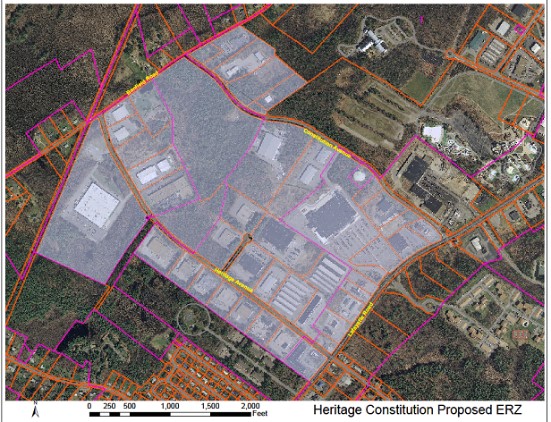 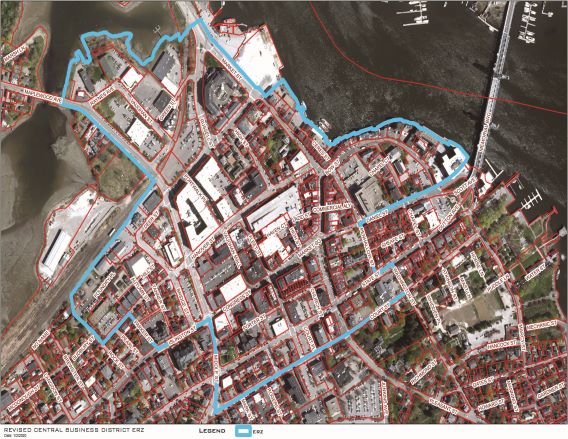 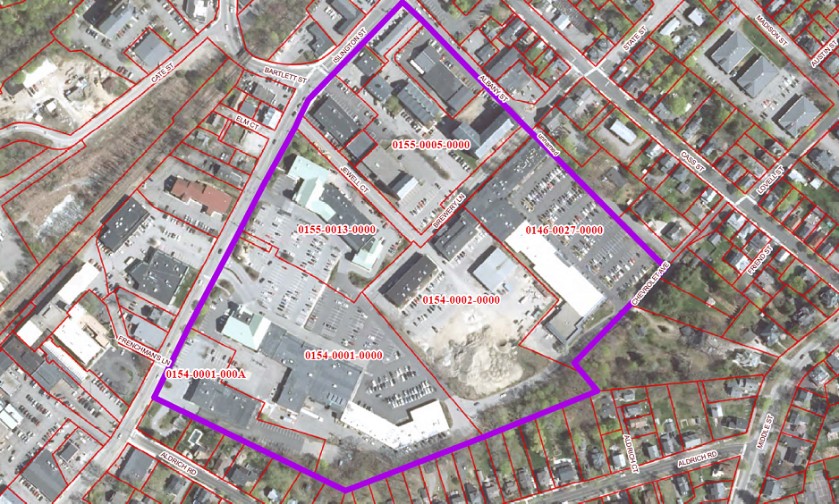