The United States Postal Service (USPS) has told City officials that it plans to move back to the downtown after relocating during the McIntyre redevelopment, Mayor Jack Blalock announced.

USPS had previously indicated it would be unwilling to consider a temporary move. However, in a conference call Friday, February 8th, Tom Samra, the USPS Vice President for Facilities, agreed that the Postal Service will attempt to secure a suitable downtown space, possibly in a redeveloped McIntyre space. Samra is responsible for all aspects of managing Postal Service properties, including all 8,470 federally-owned and 23,500 leased facilities.

The Mayor said, "I'm very pleased to see this positive result after productive conversations between residents, staff, our senators and USPS. Throughout our public input sessions regarding this project, the public has been very passionate about keeping this Post Office downtown."

The Postal Service has engaged a real estate broker to assist in finding space downtown, but thus far has been unsuccessful in its search. In the interim, Samra indicated USPS expects to relocate to temporary offices in the Heritage Avenue processing center off Lafayette Road. USPS owns the Heritage Avenue property.

The Mayor had asked U.S. Senators Jeanne Shaheen and Maggie Hassan to assist the City in communicating the importance of keeping a USPS location downtown. The Mayor, City Manager John Bohenko and Deputy City Manager Nancy Colbert Puff reinforced that message in the conference call.

“We had a very encouraging call," Mayor Blalock said. "The City Manager had prepared a map of the postal offices in the area, including the location the USPS is considering for its temporary move, 345 Heritage Avenue.”

"The City Manager pointed out that it was illogical and likely uneconomic to move these services so far away from Portsmouth customers and businesses. It became obvious that the City and the USPS shared a goal to best serve the public through a convenient, downtown location into the future.”

The General Services Administration declared the McIntyre building to be surplus for its needs in the fall of 2016. The City has been preparing an application to the Historic Surplus Property Program to obtain the property and redevelop it through a public-private partnership. From the earliest stages of this effort, the City Council made clear its preference for the Postal Service to remain on the site following redevelopment.

Samra qualified his comments by saying that the downtown space will need to meet USPS's operational needs and be offered with acceptable terms for the length of a rental agreement and rental payments that do not exceed fair market value. If those conditions are met, "USPS would be able to move retail operations back to the downtown area." The leases for all GSA tenants in the McIntyre building are anticipated to expire this June. Redevelopment of the McIntyre site is expected to take 18 months or more.

“I am glad the USPS will endeavor to return downtown," said City Manager Bohenko. "While this temporary move will be inconvenient, the community can feel confident that postal services will be part of our downtown into the future.” 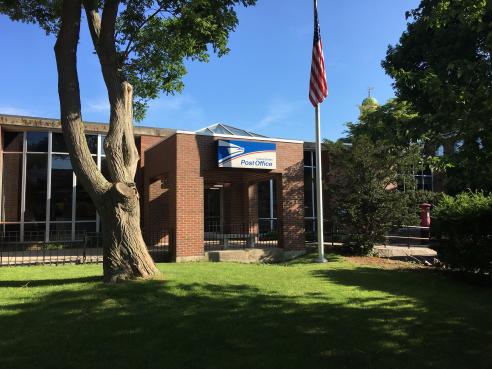