The Department of Public Works Parks & Greenery Group plans to implement a program to control the impact Canada Geese are having at Four Tree Island, Prescott Park, and the new Gateway park on Market Street.

The plan is to use small-scale fireworks including Roman candles and firecrackers to scare the geese away. The goose control will take place starting this week and the DPW crew will monitor the area for fire prevention.

Last summer, faced with the same problem, the Group conducted a controlled operation to frighten the geese away with hunting dogs owned and supervised by Charles Baxter, Arborist Foreman who are trained to respond to the sound of a blanks pistol. He and Corin Hallowell, City Parks and Greenery Foreman managed the operation which was an initial success; but eventually the geese returned.

As Hallowell explains the problem, “We are inundated with Canada Geese in these three City park locations. The geese look for large open grassy areas to feed which results in a large amount of waste that is left behind and is both unhealthful and difficult to clean. We are going to use hunting dogs to chase them and create a predator situation while shooting blanks from a blanks pistol to excite the dogs and scare the geese. The dogs don’t attack or touch the geese, they just chase them.” 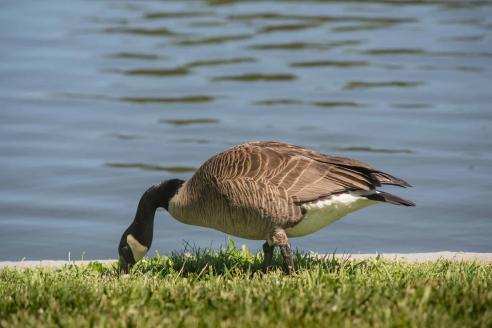