On June 19, 2021, Portsmouth Police Officer Keegan Pearl conducted a traffic stop on Gosling Road in the City of Portsmouth. As Ofc. Pearl approached the stopped vehicle on foot, the vehicle sped off at a high rate of speed. Ofc. Pearl attempted to stop the vehicle which continued west on Gosling Road. The vehicle entered onto the property of the U.S. Air Force Base on Pease Boulevard where the male operator bailed on foot. He briefly ran through the secured base before scaling a perimeter fence and exiting.

Units converged and an exhaustive search was conducted; the subject was not located. A subsequent investigation identified the operator of the vehicle to be:

DAVID C. HALL (38yo) with a last known address in Wolfeboro, NH.

The Portsmouth Police Department now has an active arrest warrant for HALL for seven (7) offenses, most notably a felony level drug charge and numerous charges related to his alleged driving behavior.

HALL is a white male, 5’7”, approximately 165lbs, bald with brown eyes. He has distinctive neck, face and head tattoos.

The Portsmouth Police Department deployed K9 Officer Aaron Stacy w/ his partner “Axe,” and the PPD Drone Unit. Additionally, we were assisted by the New Hampshire State Police K-9 Unit, Greenland Police Department, Newington Police Department and the Pease Development Authority (PDA).
Anyone having information about HALL’s whereabouts are asked to contact the Portsmouth Police Department at (603) 436-2145. The lead investigator, Ofc. Keegan Pearl, can be reached at (603) 610-7655. You can call Seacoast Crime Stoppers at 603-431-1199 if you wish to remain anonymous and have information you can also leave an anonymous tip by logging on to www.seacoastcrimestoppers.org or send an SMS text to CRIMES (274637) and include TIPSCS in your message. You could be eligible for a cash reward of up to $1,000 if your information leads to an arrest and indictment. 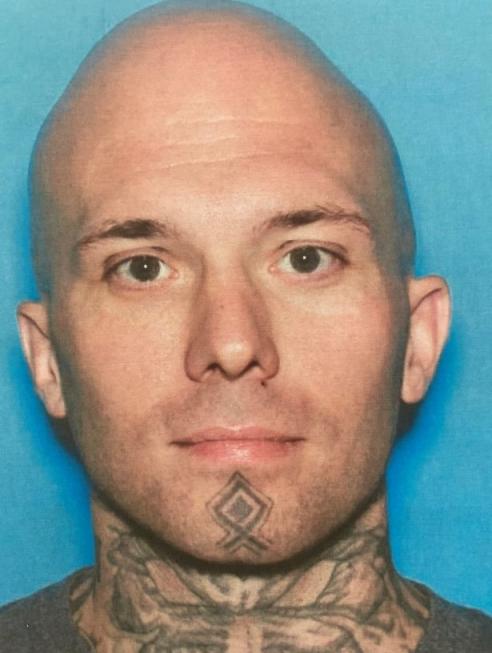