This program is cohosted with the Portsmouth Athenaeum. Registration is required. The Zoom link will be sent the week of the event.

John P. McGee Jr. was born and brought up in Portsmouth. He is most commonly known today as Jack. He attended college at Yale University and received his BA in Economics. Following college, he married his high school sweetheart, Diane O’Leary, also of Portsmouth. He went to law school at the College of William and Mary, obtaining his J.D. degree in 1975.

Jack has always been interested in Portsmouth history as well as history in general. He became a member of the Portsmouth Historical Society at the age of 12 and at one time or another has been a member of all historical societies in Portsmouth save one (The Colonial Dames). He was a long-time officer of the Portsmouth Athenaeum as well as President. He has been Director of the Wentworth Gardner Tobias Lear Houses Association and on the finance committee of Strawberry Banke.

He currently practices law in Portsmouth, under the firm name of Flynn & McGee, P.A. and he is a member of various Bar groups including the New Hampshire Bar Association and is also a member of the United State Supreme Court Bar. He has also argued many cases before the New Hampshire Supreme Court and frequently appears before other Courts as well.

When he was young, he’d often play with friends at a house across the street from the Levi Woodbury Mansion. By that point, the mansion was in a state of great disrepair and looked like something out of “Dark Shadows”, unfortunately torn down in 1960. While a sophomore at College, he read Arthur Schlesinger’s The Age of Jackson and could not believe how important Levi Woodbury was in that period. As a third-year law student he did a major paper on Levi Woodbury and since that time he has frequently lectured on him and the times in which he lived. 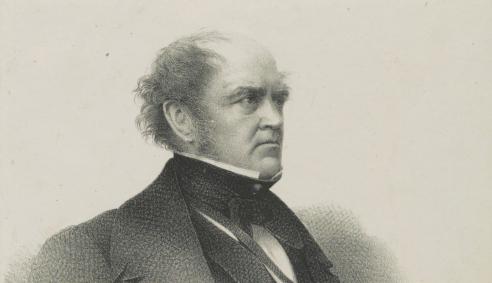