Portsmouth Public Library will host the fantastical rocketship sculptures of artist David Random in the lobby from June 11 to August 10. This year’s summer reading program theme is A Universe of Stories, and the library will be celebrating with art, events, activities and displays on the theme of outer space.

Random’s “repurposed artifacts” are reclaimed from antique mechanical and architectural parts, evolved after years of collecting. From heating grates and lawn sprinklers to kitchen utensils, Random has collected out of enjoyment for the detail designed into utilitarian objects. Fitting these together led to creating “Antique Airships” and “Retro Rockets.” Viewers will appreciate the retrofuturistic and steampunk sensibilities inherent in Random’s work.

On Saturday July 6 and Saturday August 3 from 2 to 4 PM, stop by the library for a screening of the short film Rocketship followed by a discussion with the artist and filmmaker. Rocketship was directed by award-winning filmmaker Alfred Thomas Catalfo. In it, an unlikely bond is forged between a lonely boy and an elderly man claiming to be a former astronaut. Together, they transform a vintage vacuum cleaner into a rocketship for a surprising journey.  The story is inspired by Random’s sculptures. Rocketship was shot in more than a dozen locations in the seacoast area of New Hampshire and Maine with eleven actors and actresses. It was featured in film festivals from coast to coast and was awarded “New Hampshire Film of the Year” at the New Hampshire Film Festival. It was also featured on Virgin Airways in-flight movies for almost a year. View this event on Facebook!

David Random graduated with a fine arts degree from the Massachusetts College of Art. Subsequently, he was prominent in the Boston advertising community as an Art Director and Creative Director until his retirement. He now works out of his studio in the Mills at Salmon Falls in Rollinsford, New Hampshire. His pieces have been displayed in museums and galleries from New England to Florida, and have been featured on TV (NH Chronicle) and in movies, as well as publications such as New Hampshire Magazine and others. His rocketships can be seen at DavidRandom.com. 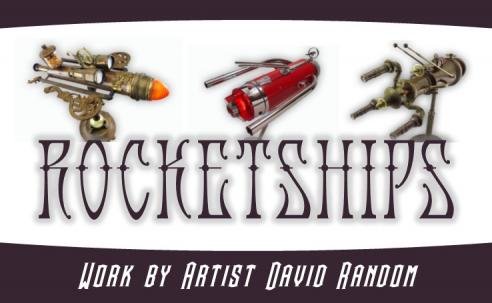