The library’s Local History series features authors and experts on local history topics. The series continues with Thomas Hardiman, author of Money, Revolution, and Books: A Multi-Generational Perspective on the Portsmouth Athenaeum’s Library Of John Fisher. Hardiman will decode the hidden history of the Fisher family, loyalists who amassed significant wealth on both sides of the Atlantic and contributed greatly to our history.

John Fisher’s name appears in many history books, but his story is not in any of them; he is only mentioned in passing. His story exists in fragments in hundreds of books and letters like an encrypted message. John Fisher, Sr. was Naval Officer for Portsmouth, Newbury, and York, then Collector of Customs for Salem, and Under Secretary of State for North America near the close of the Revolutionary War. After the war he was a high-ranking bureaucrat in the British Excise Office. More importantly, he was the “fixer” for the tory Wentworth family, using his unique status as a British official allowed by statute to hold and sell property in New Hampshire to rescue much of the family’s wealth and property seized in the war.

Fisher and his son, John, Jr., used family connections to acquire vast wealth and estates on both sides of the Atlantic. His daughter Sarah married the wealthiest merchant in New Hampshire, James Sheafe. Sarah was a major benefactor of the Portsmouth Athenaeum throughout her life, donating valuable books and paintings, and arranging for the gift of her brother’s important library in 1829. Her son, John Fisher Sheafe, married millionaire heiress Mary Lenox of New York and helped his brother-in-law build one of the world’s greatest libraries. Learn about five generations of this fascinating family, who have escaped notice until now.

Thomas Hardiman Jr., Keeper of the Portsmouth Athenaeum, has more than 30 years of experience in the museum, library, and historic preservation fields. He has been Athenaeum keeper since 2000 and was previously curator of the Saco Museum. In addition to museum administration, Mr. Hardiman has significant experience with the management, exhibition, and conservation of art and artifact collections and with the sensitive conservation of historic buildings.

Copies of Money, Revolution, and Books will be available for purchase. 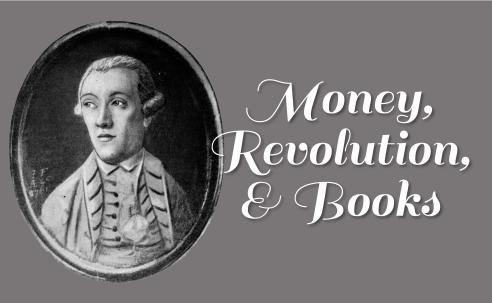