On Tuesday, May 18th at 6:30 p.m. join Portsmouth Public Library for the City’s premiere viewing of a 16-minute audio-visual tour of Portsmouth during the 1950s! Portsmouth as we know it today came into being during the Cold War, a forty-year period of international tension and threat of nuclear war.

The 1950s were a time of rapid change and growth as the Seacoast Region was transformed by military expansion. Pease Air Force Base was built to house bomber jets capable of delivering nuclear bombs to the Soviet Union, and the Portsmouth Naval Shipyard transitioned to production of nuclear powered, fully submersible submarines. Between 1950 and 1960, Portsmouth’s population increased by about 8,600 people to reach 26,900, which was larger than the current population of around 22,000. This era saw the birth of the “Baby Boomers” when World War II veterans had growing families. Transportation, mobility, and popular culture were transformed, and the vintage style now known as “Mid-century Modern” was new. Housing developments of colonial capes and ranch houses were built at the outer edges of the city. Highways bypassed the downtown to move increasing number of automobiles on the roads. Businesses flourished and began to move out of town as well.

This video captures historical photos and recollections of what we did for work, where we lived, where we shopped and ate, what we did for recreation, urban renewal, and other social and cultural aspects of Portsmouth during the Cold War. It will be followed by a Q & A and other recollections of the 1950s by several illustrious local community member panelists, and moderated by City Community Development and Portsmouth Public Library staff. 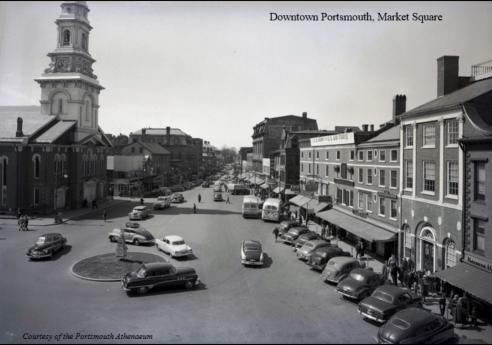