The City of Portsmouth has accepted a $9,760 grant from the New Hampshire State Library for the preservation and digitization of nine volumes of historic “Overseers of the Poor” documents, dated 1853 to 1885.

The funds received from the NH State Library will allow for the cleaning, preservation and, in some cases, rebinding of the volumes. In addition to restoration, each document will be scanned to microfilm and digital media for preservation and improved accessibility by the public.

This preservation project was made possible through funds received from the sale of the New Hampshire Moose Conservation License Plate and administered by the New Hampshire State Library, a division of the Department of Cultural Resources.

The NH State Library also features Portsmouth’s grant application for this funding as a model for others seeking funding.

In announcing the grant award, City Director of Finance and Administration Judie Belanger noted, "While the City was able to allocate funds to create a proper archival storage room in City Hall, the expenditure to restore these historical documents would not have been possible in as timely a manner without the support of the Moose Plate Grant from the NH State Library. Sharing the investment in preserving New Hampshire's history is a great example of the collaborative initiatives that Moose Plate grants are intended to serve."

In a long-term effort to preserve many of the City’s historical documents, in FY2018 the City completed construction of a new archives for the storage of the City’s permanent records. Many of these records, due to age and previous storage in the City Hall basement, are deteriorating. The new archives room includes a quarantine facility where these documents are stored until they are cleaned of mold and pests.

These efforts are part of a 20-year $3 million Capital Improvement Plan project to preserve more than 500 documents of historical and legal significance. Grant funds allow the City to shorten the timeframe of this project so that some of the more damaged books, some of the City’s oldest treasures, are preserved.

The City has received three additional Moose Plate Grants to preserve and digitize the City’s archival records: $9,535 in 2018/2019 to preserve, digitalize and microfilm five historic Overseers of the Poor documents; $9,966 in 2017/2018 to preserve and digitize seven historic tax and shipping documents; and $7,865 in 2018/2019 to preserve two volumes of military records: Application Affidavits for Government Bounties – Civil War 1865-1867 and Spanish-American & World War I Veteran’s Service Records

In the grant application for the Moose Plate funding, Finance Department Project Manager Abby Mills noted, “In 2023, the City will be celebrating its 400th Anniversary and as part of that celebration it is our goal to highlight the importance of our restoration and preservation initiatives.  We hope to emphasize the increased public access to these documents due to programs such as this, as well as investments made by taxpayers themselves through the City’s 6-year Capital Improvement Plan. The documents being preserved thanks to this grant cover an important timeline in Portsmouth and in New Hampshire: from the Presidency of Franklin Peirce in 1853 (New Hampshire’s only US President) to the American Civil War (1861-1865) and the decline and regrowth of Portsmouth’s affluence. They are records of the City’s proud service to our country during these times of conflict.”

This Conservation License Plate Grant Program is made possible by the sale of "Moose License Plates." Grants are available to public institutions with publicly owned documents that are significant to the history of New Hampshire. For more information on the Moose License Plate program visit: https://www.mooseplate.com/ 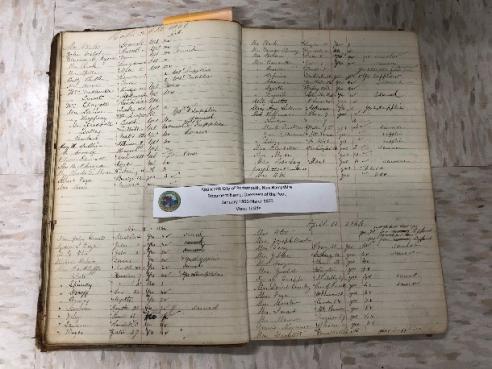